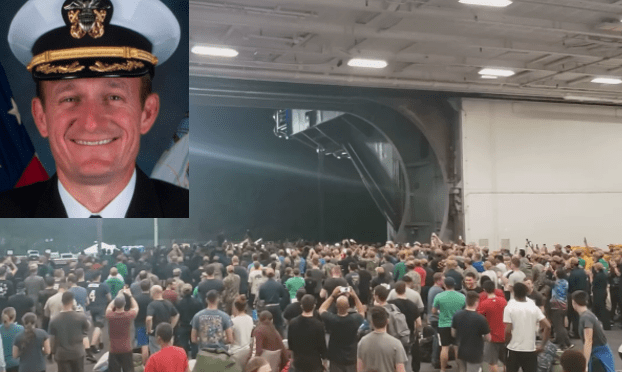 Capt. Brett Crozier was relieved of command of the USS Theodore Roosevelt, but he left to the roaring approval of its crew members. (Facebook/U.S. Navy)

GUAM – Hundreds of Navy personnel gathered on board the coronavirus-stricken USS Theodore Roosevelt’s hangar deck to cheer for and applaud their commander, hours after he was dismissed.

Capt. Brett Crozier was relieved of duty on Thursday due to a loss of confidence in his ability to command and for not following the chain of command to voice his concerns about coronavirus on the ship to service leaders, FOX News reported.

A video was posted to Michael Washington’s Facebook page along with the hastags #MYCO and #WEARETRSTRONG.

“That’s how you send out one of the greatest captains you ever had,” someone says in the video. “The GOAT, the man for the people.”

The ship docked a week earlier in Guam after several cases of coronavirus were reported aboard the ship. Crozier wrote a letter to senior military officials, which was leaked to the San Francisco Chronicle and published Tuesday.

In the letter, the captain discussed conditions aboard the ship. In particular, the danger the virus posed to his personnel. Crozier warned that “if we do not act now, we are failing to properly take care of our most trusted asset – our sailors.”

Furthermore, Crozier made the request to have almost the entire crew removed to slow the spread of the outbreak.

“This decision is not one of retribution,” Modly said.

“I did not come to this decision lightly. I have no doubt in my mind [Captain] Crozier did what he thought was in the best interest [of] the safety and well being of his crew. Unfortunately, he did the opposite.

“It unnecessarily raised alarms with the families of our sailors and Marines with no plan to address those concerns,” Modley continued. “It raised concerns about the operational security and operational capability of that ship that could have emboldened our adversaries to seek advantage and it undermined the chain of command.”

He was also unhappy the letter was sent out over email, which is “not secure.”

Modly said he didn’t mind Crozier raising concerns, but “it was the way in which he did it.”

Modly said it “created panic on the ship” and “misrepresented the facts,” adding that Americans back home were “panicked.”

The Navy has already moved some 1,000 sailors off the ship and was working to remove another 2,700 by Friday.