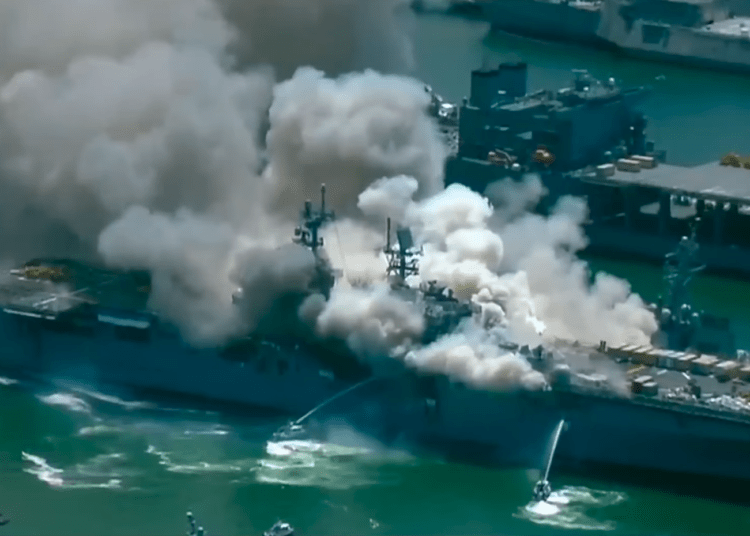 USS Bonhomme Richard was destroyed by arson in 2020. (YouTube)

SAN DIEGO – A sailor accused of arson in a massive fire that destroyed the USS Bonhomme Richard will face a court martial for the crime that also left several servicemembers injured, the U.S. Navy said Friday.

Seaman Recruit Ryan Mays, 20, faces two charges — aggravated arson and the willful hazarding of a vessel — in military court for the July 2020 blaze that injured dozens of personnel aboard the ship, KTLA reported.

The USS Bonhomme Richard is an amphibious assault ship. After the flames spread, it burned for five days and sent pungent smoke drifting over San Diego.

During the days-long blaze, at least 40 sailors and 23 civilians were injured, according to the BBC.

Damage from the arson marked one of the worst noncombat warship disasters in recent memory. Consequently, the $4 billion (replacement value) USS Bonhomme Richard had to be scrapped.

“Evidence collected during the investigation is sufficient to direct a preliminary hearing in accordance with due process under the military justice system,” Navy spokesperson Cmdr. Sean Robertson said about a year after the destruction occurred.

Prosecutors say Mays set the fire because he was disgruntled after dropping out of Navy SEAL training, KTLA reported.

However, Mays’ defense attorneys say there is no physical evidence connecting him to the inferno.

According to defense lawyer Gary Barthel, the decision to proceed to trial was made despite a hearing officer’s recommendation that there wasn’t enough evidence to win a conviction following a preliminary hearing in December.

Barthel said Mays is discouraged by the decision. He maintains his innocence and looks forward to facts coming out at trial.

During December’s hearing a witness placed Mays in the area where the fire developed aboard the ship. Another witness said he later made an incriminatory statement.

“I’m guilty, I guess. I did it,” Mays mumbled as he was being led to the brig in August 2020, Sailor Carissa Tubman testified. Mays then said: “It had to be done.”

The Navy commissioned the USS Bonhomme Richard on August 15, 1998.