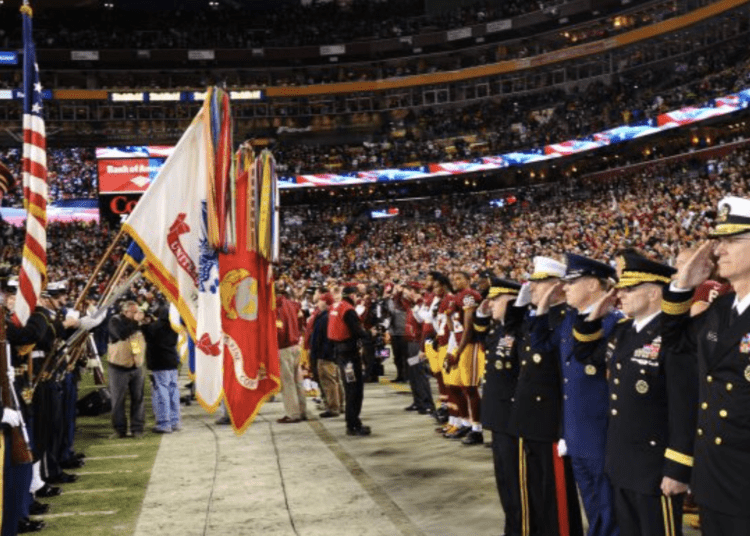 Will you join me in saluting our military veterans? Better yet, how about a standing ovation?  This is a minimal investment to offer our service members who make incredible sacrifices on behalf of our nation.

U.S. military service members are always ready to salute and go as deployment orders send them into harms way to protect and serve American interests around the world.

So for the military personnel who’ve shouldered their weapon and carried an A3 bag, duffle bag, go bag,—or equivalent—onto a C130 cargo plane, M35-deuce and a half, or Navy ship, this recognition is for you. To everyone who’s worn the military uniform honorably, we salute your service. For our fighting force members who carry battle scars, physically and emotionally, this is your standing ovation.

The elementary school attended by my grandchildren invited me, along with other veterans, to attend an assembly to honor those who’ve served. They asked us to attend the event wearing military paraphernalia if feasible. Therefore, I found my old field jacket and brushed the dust off my beret so I could fulfill their request.

I was thrilled to be used as a show and tell prop by three doting grandchildren. Yet of equal or perhaps greater significance, I was privileged to stand shoulder-to-shoulder with fellow servants who possessed personal knowledge of the thankless sacrifices that are made by service members. The assemblage of military veterans was quite eclectic. We were represented by recently discharged Marines in their early 30s up to an Army sergeant major in his 80s. Every branch of the military was represented, about 50 in all. Finally, the school played the armed forces medley, featuring service songs from each military branch: “Anchors Aweigh” for the U.S. Navy, “The Caissons Go Rolling Along” for the U.S. Army,  “The Wild Blue Yonder” for the U.S. Air Force,  “The Marines’ Hymn” for the U.S. Marine Corps and “Semper Paratus” for the U.S. Coast Guard. Hence, they asked veterans to stand in honor when their respective service song was played.

Consequently, I had a smile on my face along with a lump in my throat … and I received hugs from three devoted grandkids. It was a very cool day!