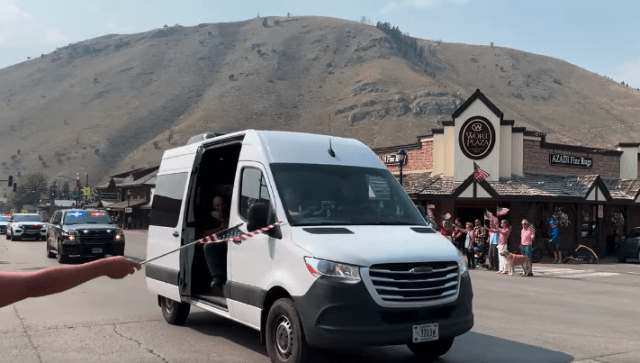 McCollum was a former wrestler who graduated from Summit Innovations School after attending Jackson Hole High School. He was not only a Marine, but a brother, son, friend, husband and soon-to-be father to a baby due in three weeks, Jackson Hole News & Guide reported.

“I’m devastated to learn Wyoming lost one of our own in yesterday’s terrorist attack in Kabul, Afghanistan,” read a press release issued by Gov. Mark Gordon last Friday. “Our thoughts and prayers are with the family and friends of U.S. Marine Rylee McCollum of Bondurant. Jennie and I, along with all of Wyoming and the entire nation, thank Rylee for his service.”

McCollum’s family was escorted into Jackson on Monday by local police, sheriff’s deputies, and USMC personnel.

A local hotel posted details of the escort as the community embraced the family of a fallen hero.

Officers from the Jackson Police Department, U.S. Marine Corps and Teton County Sheriff’s Office escorted Rylee McCollum’s family into Jackson today. Rylee was one of the 13 U.S. service members killed in Afghanistan on Aug. 26. McCollum was a former student of Jackson Hole High School, graduate of Summit Innovations School and high school wrestler. He was also a brother, son, friend, husband and soon-to-be father to a baby due in three weeks.

The Marine was scheduled to return home at the end of September, according to his sister, Roice McCollum, who added that her brother signed up to join the military the day he turned 18, according to the Jackson Hole News & Guide.

“He wanted to be a Marine his whole life and carried around his rifle in his diapers and cowboy boots,” she wrote to a local news organization. “He was determined to be in the infantry and this was his first deployment.”

During the final conversation he would have with his sister, about a month before he died, McCollum talked about wanting to see the cabin the family was working on when he returned to Wyoming, she said. Moreover, the soon-to-be father expressed his nervous excitement at parenthood with his wife, whom he married just before his deployment.