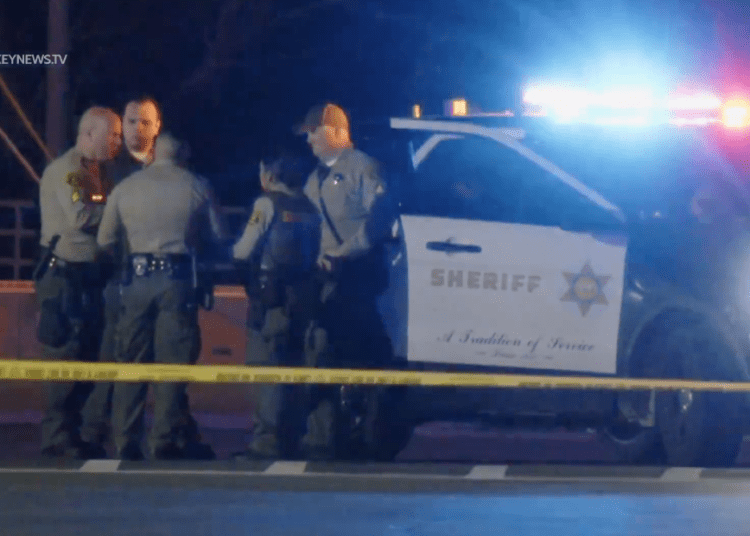 UPDATE: The deputy has been identified as Jonathan Buchan, 33, of Santa Clarita, ABC 7 Los Angeles reported.

SANTA CLARITA, Calif. – A deputy with the Los Angeles County Sheriff’s Department has died by suicide at a Santa Clarita bar. The law enforcement agency confirmed Friday morning that overnight, a deputy from the Century Station shot himself at Mabel’s Roadhouse, located at 26328 Bouquet Canyon Road, according to KTLA.

The call of a shooting was first reported at 1:28 a.m., according to the Los Angeles County Fire Department. They arrived on scene at 1:32 a.m., noting one patient was transported from the location in an unknown condition. The sheriff’s department later confirmed the patient was one of their deputies, and he did not survive.

A small group gathered Friday morning outside of the emergency room at Henry Mayo Newhall Memorial Hospital. The deputy’s father, family members, other deputies and Pastor David Hegg of Grace Baptist Church were present. Hegg said the deputy’s family members are congregants of the church and reside in the area, the Santa Clarita Valley Signal reported.

“The family, in times of great adversity like this, they have a place to go and they have people to shepherd and guard and guide them and that’s who I am and that’s what our church family is. So, we’re going to take really good care of them,” said Hegg. “We’re going to remind them that death doesn’t overshadow all that the life meant and so a life that was well lived, continues to be something that we all should remember, and thank God for, no matter how short it may be.”

UPDATE: The Los Angeles County Sheriff’s Department has confirmed that a deputy sheriff took his own life at the bar early this morning.

EARLIER: At least one person was shot at a Santa Clarita bar overnight. pic.twitter.com/2CVJHsXKq2

The deputy’s father, who asked not to be identified, said his son was 33-years-old and had served two tours in Afghanistan during his four years in the Marine Corps. He has served LASD for the past three years.

“He was a real hero,” the father said, according to the Valley Signal.

A handful of LASD officials could still be seen gathering about 9:00 a.m. by the intersection of Bouquet Canyon and Soledad Canyon roads where the business is located.

“We have multiple investigators on scene at this time,” according to Deputy Veronica Fantom of the Sheriff’s Information Bureau, adding she could not confirm any details of the shooting. “That’s an ongoing investigation.”

“Our hearts are aching for this young man’s family and the grief he must have been enduring. Please seek guidance if you or anyone you know is in crisis,” Mabel’s said on Facebook, adding the 988 suicide and crisis hotline.

Becky Hansmann, owner of the bar, said the deputy was not a regular, but had been to the location in the past week. She was not present when the deputy took his life, but staff notified her of the circumstances about 1:15 a.m., she said.

Hansmann said there was nothing unusual going on prior to the shooting, according to her employees.