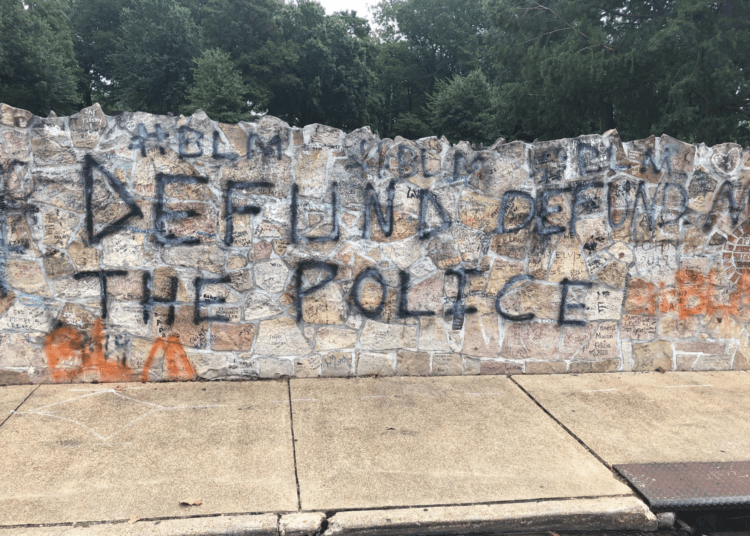 MEMPHIS, Tenn. — The walls outside of Graceland in Memphis, Tenn., were tagged with graffiti by vandals on Sunday, with phrases like “BLM” and “No Justice No Peace.”

Graceland is the former home of music legend Elvis Presley.

Reporter Shelia O’Connor tweeted out photographs of the damaged walls on Tuesday morning, which included messages about the death of Breonna Taylor, who was killed in Louisville after police were fired upon by her boyfriend while serving a narcotics warrant on her home.

“Crews are cleaning up after someone spray-painted the walls of Graceland with messages like ‘Defund MPD’ ‘Arrest Breonna Taylor’s murderers’ and ‘BLM’ and more,” she tweeted.

Crews are cleaning up after someone spray painted the walls of Graceland with messages like “Defund MPD” “Arrest Breonna Taylor’s murderers” and “BLM” and more. I’ll give you a live look on @FOX13Memphis midday. pic.twitter.com/iggrafPLb8

Other messages included calls to defund the police and “I can’t breathe,” Fox reported.

The executive director of Levitt Shell spoke with the Memphis Police and said that between 7 p.m. and 7 a.m., the property had been defaced.

Graceland did not comment when contacted about the graffiti.

Repairs are estimated to cost around $150,000, according to reports.