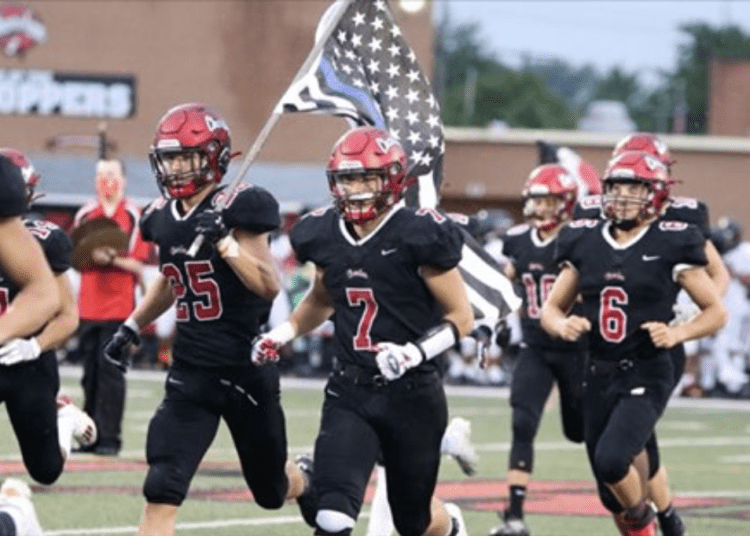 CHARDON, Ohio — An Ohio school district is banning “Thin Blue Line” flags after a high school football player carried one onto the field to honor local first responders, including a coach who is also a police officer.

Chardon Local Schools Superintendent Dr. Michael Hanlon made that announcement in a letter to community members following a controversy that began when a player carried the police-honoring flag onto the field prior to the season-opener.

“School district policy does not permit engagement in political activity,” Hanlon wrote. “Nevertheless, it is important to emphasize that we clearly understand how this action could be perceived as political in nature. As a result, this display will not be a part of future pre-game activities at Chardon athletic contests,” The News-Herald reported.

Continuing, Hanlon wrote, “In addition, measures will be put in place by our athletic director to review any planned pre-game displays for possible connections to any form of discrimination or particular political views.”

After the game last Friday, members of the community stirred up a debate over whether the display was an innocent move in support of local first responders or of it had racial connotations, prompting some residents to reach out to district administrators directly, according to Hanlon.

Posted by The News-Herald on Tuesday, September 1, 2020

The superintendent claims that running out onto the field with the flag “could be interpreted as a racially motivated action” and he also noted that district policy “does not permit engagement in political activity.”

Even though Hanlon is taking restrictive action deemed offensive by most LEOs, he had to acknowledged the schools’ close ties with first responders after a shooting at Chardon High School eight years ago left three students dead and injured two, including one who became paralyzed, Fox News reported.

“It does not appear that this action was motivated by racism, rather a show of support for one of our coaches who serves as a police officer, as well as for the first responders in our community who have developed a special relationship with our school and students in the wake of our school tragedy of February 27, 2012,” Hanlon wrote.

Frank Hall, a former assistant football coach and teacher at the school, received national praise after he charged at the gunman and later prayed with the victims. Days after the shooting, he pushed back at the attention and said the real heroes were the emergency responders who rushed to the scene.

The shooter, T.J. Lane, was 17 years old at the time. He was sentenced to life in prison.

Hall is credited with chasing him away and potentially saving more students from the gunfire, according to Fox.

In response to the district’s move to ban the flag, Geauga County Commissioner Ralph Spidalieri demanded Hanlon’s resignation, according to 19 News.

“Your letter sickens me and so many others that have reached out to me and expressed the same disgust with your inability to stand up and recognize their patriotism,” Spidalieri wrote in reference to the players who ran out alongside the flag.