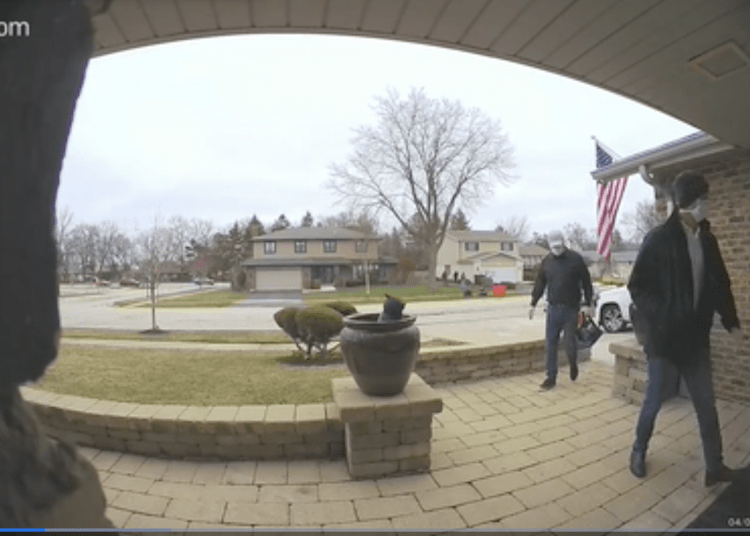 ARLINGTON HEIGHTS, Ill. – Two armed robbery suspects were captured on a Ring doorbell camera attempting to invade a home while wearing coronavirus-protecting medical masks and gloves. The crime became deadly for one of the armed bandits and the other is jailed.

The homeowner defended his family in Arlington Heights, a Chicago suburb under a coronavirus lockdown, as he shot one intruder and chased the other out of the house.

Police made the video available Thursday to the Arlington Daily Herald; the crime occurred last Saturday.

The homeowner later told investigators he opened the door to the two strangers since he was expecting landscapers.

He is seen on video chasing Finnan out of the house and pummeling him. Shortly after the take down and pounding, Finnan is seen running off.

Once the homeowner returned to the house, police said he fatally shot Brodacz during a struggle.

“Fearing for his life and the lives of his wife and children, the homeowner discharged a round from the family handgun, striking Mr. Brodacz in the abdomen,” police said, WGN-TV reported.

Brodacz lost his gun in the fight with the family, but then pulled a knife from his waistband, the homeowner told police.

Finnan told investigators after his arrest that Brodacz claimed he saw $200,000 cash in boxes in the home 20 years ago and believed the money was still there, the paper reported.

Finnan and Brodacz reportedly had a relationship working at a car dealership together.

Police said it was a targeted crime and not a random act of violence against the community.

Prosecutors charged Finnan with felony murder, participating in a crime that leads to another’s death.