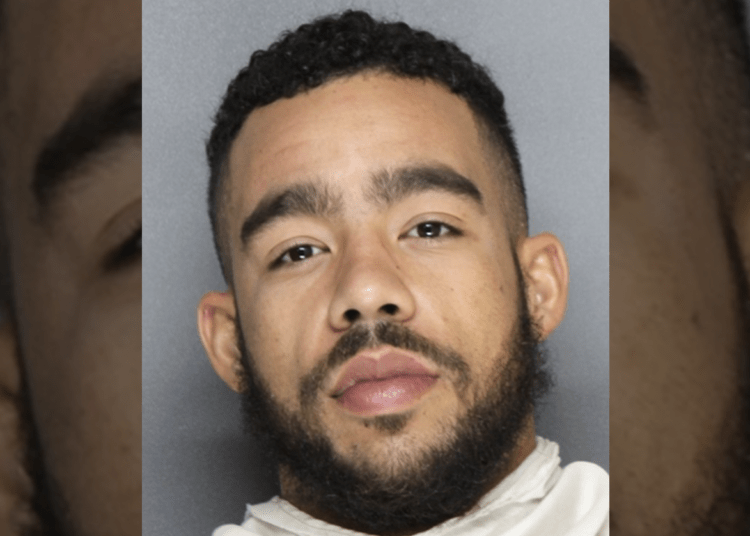 Jeremy Harris, 31, was arrested Thursday night in connection to a murder of a 60-year-old Celina man. Dallas police charged him on Friday with two additional counts of murder. (Collin County Jail)

DALLAS — After four homicides that have been pieced together, and a suspect in custody, the Dallas Police Department believes the defendant is a serial killer.

The Dallas-area shooting victims were random, according to reports.

A Southern Methodist University student waiting for a ride after a Halloween party downtown. A panhandler asking for help. A husband heading home, The Dallas Morning News reported.

Each time, the gunman pointed a gun from the window of his driver’s seat, police say. As they died, he drove off. Once, he drove a white Ford Taurus. The other times, the killer fled in a black Chevy Tahoe.

On Friday, Dallas police announced they had charged Jeremy Harris, 31, from Red Oak — south of Dallas — with murder stemming from those killings, which started on Oct. 31 and ended with his arrest on Wednesday in Celina — a small town north of Dallas —  on a fourth murder charge.

Reuben Ramirez, a Dallas Police deputy chief who oversees the criminal investigations division, said the shootings were committed by a “serial killer.”

Assistant Chief Avery Moore said: “We don’t believe there was any other motive than it was random.”

Dallas police in recent weeks had asked for the public’s help to solve these crimes, releasing videos of the vehicles. They also launched a multi-agency manhunt this week. It ended with the U.S. Marshal’s North Texas Fugitive Task Force, which includes some Dallas officers, apprehending Harris, according to The Dallas Morning News.

Harris’ arrest marks a major break in a number of violent crimes that Dallas police had been investigating that involved a black Chevy Tahoe with black rims. Two of the victims were shot last weekend in one of the city’s deadliest this year. They were both gunned down on Saturday.

Dallas Police Chief U. Reneé Hall said the uptick in violence last weekend was “alarming because it was separate and apart from anything that we’ve seen.” She applauded the law enforcement efforts that resulted in Harris’ charges.

“The knowledge that someone is randomly, with no real reason and reckless regard for human life, going around murdering individuals is a separate kind of fear,” Hall said.

Dallas police linked Harris to the crimes after he was charged with killing a 60-year-old Celina man on Wednesday.

Harris was being held in Collin County Jail on bonds totaling $3 million on Friday.

Collin County District Attorney Greg Willis said in a statement on Friday that he was working with numerous law enforcement agencies on the case.

Authorities suspect Harris in a series of shootings in North Texas that unfolded in Frisco, Prosper and Denton.

The Dallas Morning News outlined the crimes as follows:

Robert “Jaden” Urrea, a 19-year-old SMU student, had just called a rideshare around 3 a.m. on Oct. 31 and was crossing the intersection of South Harwood and Jackson streets in downtown Dallas when a white Ford Taurus with chrome rims and tinted windows pulled over.

The driver appeared to summon Urrea to the passenger side and shot and killed him, according to an arrest affidavit.

Surveillance cameras captured the Ford speeding through red lights with its headlights off.

Dallas police found that car in a repair shop on Thursday and discovered a single fired cartridge under the passenger seat, court records show.

An interview with an unnamed witness confirmed that Harris was driving the car the night of the shooting, according to the affidavit. Police on Friday said that it belonged to Harris’ girlfriend. He took it after a fight and was gone for four hours. Police did not provide other details.

About 40 minutes later, Kenneth Jerome Hamilton, a 57-year-old man was found fatally shot in the driver’s seat of a car in east Oak Cliff, police say. It happened at a red light and the gunman in that incident also drove a black Chevy Tahoe. His wife told WFAA that her husband was shot randomly and for no reason.

Assistant Chief Avery Moore said Harris was also being investigated in connection to an aggravated assault on the 6020 block of Grand Avenue around 12:40 a.m. Monday. No other details were provided.

The following day at about 10:40 p.m., officers responded to a shooting on East University Drive in Denton — northwest of Dallas — where a driver and passenger, both 20, said a vehicle pulled up beside them and started shooting. Both women suffered non-life-threatening gunshot wounds, Denton police said in a news release.

On Wednesday, firefighters found 60-year-old Blair Carter dead inside a burning home in the Greenway subdivision in Celina, which is north of Dallas and east of Denton.

Witnesses said they had seen a man running away from the house with a backpack after hearing gunfire, Celina police said in a news release. They also described seeing a black Chevy Tahoe.

Police officials said the Celina murder investigation caught the attention of detectives, and on Friday, Moore confirmed that Carter was related to an ex-girlfriend of Harris.

Dallas police officials said they are looking at other potential shootings to see if Harris was involved but would not elaborate on how many because they did not want to compromise the investigation.

Arrest warrant affidavits filed in the three murders in Dallas illustrate how homicide detectives connected Harris to the incidents.

According to court records, police got a critical tip after Harris was arrested by Celina police for murder.

Harris was connected to the scene of the crimes through cellphone records, according to an arrest warrant.

When police searched Harris’ apartment, they found black rims that Harris had attempted to remove from his SUV a few days before his arrest — as news outlets circulated images of his black Chevy Tahoe. Witnesses said they saw Harris remove the rims and told police, according to records.

Police would find the handgun in his SUV — taken apart, destroyed and burned. An analyst confirmed it was the weapon used in the offenses.