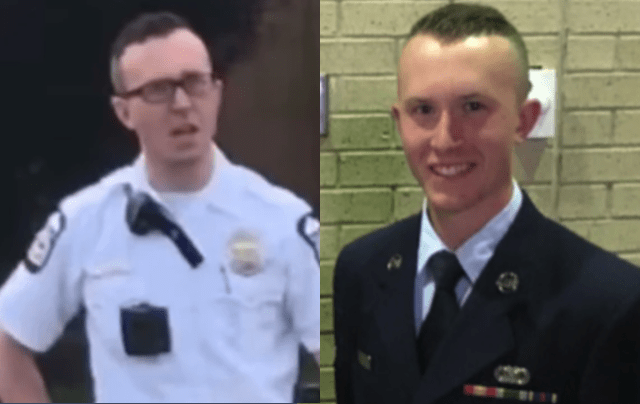 Officer Nicholas Reardon following the fatal encounter with MaKhia Bryant, left, and as a member of the National Guard, right. (Facebook/Twitter)

COLUMBUS, Ohio – A Columbus police officer has been cleared after an Ohio grand jury refused to indict him for the shooting of Ma’Khia Bryant.

Bryant, 16, was in the process of shoving a knife toward a young woman, Tionna Bonner, 22, when Officer Nicholas Reardon opened fire, saving Bonner from great bodily injury or death on April 20, 2021.

Neighbors who were present during the incident supported the officer’s quick response to the lethal encounter.

Donovan Brinson, who provided a security video to investigators, said he believed that had police not taken immediate action, more people could have been killed, Law Officer reported.

“They were calling each other the B-word, so I figured it was just a girl fight,” said Brinson, who pulled up into his driveway as the fight unfolded.

He said the yelling escalated moments later when he took his dog out back, so he went back into his home.

And when police arrived, he said he heard four shots as his wife, Rachel, dove to the floor.

Brinson said he looked out the window of his laundry room and saw the mortally wounded Bryant lying on the ground.

He quickly thought of his surveillance camera affixed to the garage and watched the footage, which captured the fight and the flash of a knife.

“It was violent and all just happened so fast,” Brinson said, citing a girl dressed in pink who was the second female involved in the altercation with Bryant.

After viewing his 26-second video, Brinson was convinced the officer saved lives.

Another neighbor, Ira Graham III, a photographer and videographer who was working at home, said he heard the gunshots on that Tuesday afternoon.

“I saw a bunch of cop cars coming down the street,” he said, adding that he saw officers performing CPR on Bryant and that he later saw the police video of Bryant’s actions.

“I believe in truth and facts. Video doesn’t lie,” he said. “She was in full attack mode.”

The girl “was literally aiming a knife at this young lady,” Graham said of Bryant. “She needed to be stopped at that point. That young lady’s life was at stake.”

Reardon went before a grand jury Friday, according to Jeff Simpson, president of the Fraternal Order of Police Capital City Lodge No. 9. The grand jury returned a “no bill,” meaning it did not find probable cause that a crime had been committed, The Columbus Dispatch reported.

Reardon “acted appropriately,” Simpson said. “It’s unfortunate when anyone loses their life, but the officer saved lives that day and did what he was trained to do.”

A press release confirmed that Reardon fired to protect Bonner.

The case was presented to the grand jury by Special Prosecutors H. Tim Merkle and Gary Shroyer.

“Under Ohio law the use of deadly force by a police officer is justified when there exists an immediate or imminent threat of death or serious bodily injury to the officer or another,” the special prosecutors said in a widely reported press release.  “The Franklin County Grand Jury has completed a full and comprehensive review of the incident and has returned no criminal charges.”

Following the heroic actions of Reardon, LeBron James tweeted an image from the scene of Bryant’s shooting with the caption: “YOU’RE NEXT #ACCOUNTABILITY.” (The shooting occurred the same day a Minnesota jury convicted Derek Chauvin in the death of George Floyd.)

James was slammed by critics on social media who accused him of using his platform to incite violence against the officer to his nearly 50 million followers while seemingly suggesting that the shooting was unjustified.

James deleted the tweet and explained that he sent it out of”ANGER.” He never apologized or acknowledged that Reardon’s actions were necessary to preserve the life of another.

The White House also used their platform to tacitly incriminate the heroic actions of the officer, Law Officer reported.

“Let me just say, since you gave me the opportunity, the killing of 16-year-old Ma’Khia Bryant by the Columbus police is tragic. She was a child,” White House Press Secretary Jen Psaki said last year. “We know that police violence disproportionately impacts Black and Latino people and communities and that Black women and girls like Black men and boys experience higher rates of police violence.”

Psaki failed to mention that the split-second decision made by Reardon actually saved the life of a Black woman. His actions should be lauded, not falsely categorized as “systemic racism.”

Amazingly, all of Reardon’s critics have been quiet since he was cleared on Friday.