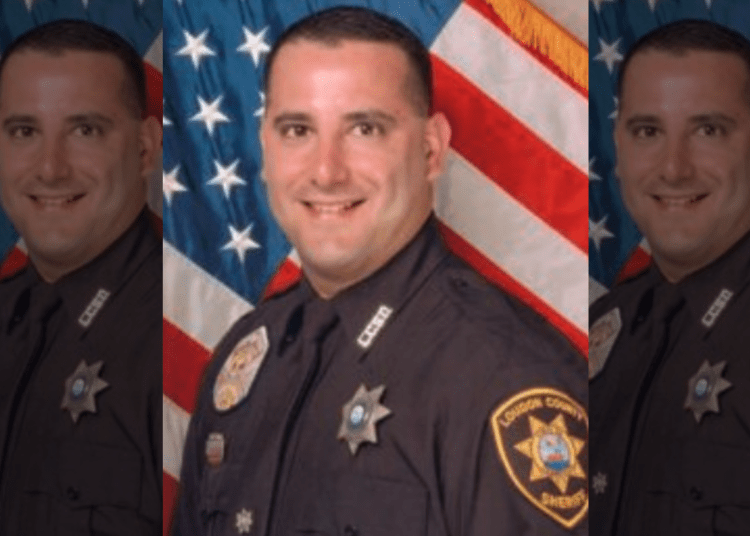 LOUDON COUNTY, Tenn. – Sheriff’s Office K-9 Sergeant Christopher Jenkins has died after being struck by a semi-truck being driven by an alleged impaired driver.

According to the agency, Sergeant Jenkins was responding to a report of a hazard in the roadway on I-75 northbound, near the 73.8 MM in Loudon County. He was attempting to retrieve a fiberglass ladder in the road, when was struck and killed. Jenkins’ K-9 partner, Deja, was in the back seat of his patrol vehicle but was uninjured.  Two other passenger vehicles were also struck by the semi-truck but there were no injuries.

Jenkins, age 48, was a U.S. Air Force veteran, and a 20 year veteran of the Loudon County Sheriff’s Office. Over his Law Enforcement career he served in multiple positions at LCSO, beginning as Corrections Deputy, Patrolman, and ultimately K-9 Officer, rising to the rank of Sergeant and Supervisor. Chris graduated from the Tennessee Law Enforcement Academy in 2004, ironically on the same day that his first cousin, Deputy Jason Scott of the same department, died in the line of duty from a gunshot while responding to a domestic incident call.

Deputy Scott’s was the last death suffered by the department until Jenkins’.

The admiration that the community and his and other Law Enforcement organizations felt for Jenkins was evident immediately, but never more so than the day after this tragic incident when he was escorted from the University of Tennessee Forensic Center back to his community. A six mile long line of Law Enforcement vehicles traveled with him on Interstates 40 and 75, with traffic stopped on both sides of the roadway in respect.

Sheriff Tim Guider said that “Chris inspired deputies with his strong work ethic and his positive attitude. He had a great loyalty and respect for his fellow deputies. No task was too small for Chris or no job too big. He was a gifted K-9 handler and a respected supervisor. He led his team from the front, and he was right there with them if things broke bad. Chris and his K-9 partners, Diego and later Deja, were always a big hit during community events. The children loved him, his fellow deputies loved him, and I loved him. We will all miss him beyond words.”

“There are no words adequate to capture what made this man larger than life,” said Sgt. Chris Hutchins. “Simply put, he was the very best of us, and it wasn’t even close.”

Jenkins “was always trying to take care of everyone around him,” Hutchins said, remembering how his colleague would hug him and tell him to be careful at shift change.

Paul Curtis, his Former K-9 Supervisor, joked about Jenkins and his career as a K9 officer, telling the crowd at the funeral, “He met every challenge – he may have created a few of them. (But) he never wavered.” Then, turning serious, said “If you wear a badge today or plan on wearing one tomorrow, by all means, be the person that is diligent in sharpening your skills, be the one that strives to perfect your tactics, and be the officer that works to heighten your knowledge of your profession. Those are things we should all do. But if you want to be a true pillar of your community and the greatest asset to your family, your coworkers, and the members of your community, be a Chris Jenkins.”

Chris’s son, Clay Jenkins, is also a Patrol Deputy with the Loudon County Sheriff’s Department. He called his father his hero with a badge, adding, “Dad, you were, and still are, Superman.” Clay Jenkins told the audience at his father’s funeral that wearing a Loudon County sheriff’s uniform was the most honorable thing he has ever done in this life. “I couldn’t help but follow in the best footsteps,” he said of his father. “I always wanted to make him proud.” Clay Jenkins said he will carry his legacy with honor, adding, “I want you to look at me and see the walking image of my dad.”

The driver of the truck that lost the unsecured ladder from his truck was located and charged with Driving on a Suspended Driver’s License and three counts of misdemeanor Reckless Endangerment.

The driver of the semi-truck, Christopher Savannah of Houston, Texas has been charged with Vehicular Homicide, Reckless Endangerment X3, Driving Under the Influence, Possession of a Handgun While Under the Influence, Simple Possession, Possession of Drug Paraphernalia, and also did not have a valid CDL license to operate the truck. The truck was subsequently placed out of service by the Tennessee Highway Patrol due to several mechanical issues that were discovered upon inspection.

Editor’s Note: Sergeant Christopher Jenkins was killed in the line of duty on February 3, 2022. While we unfortunately did not have sufficient information to cover this story in a timely manner, we are honoring him today for his ultimate sacrifice. Our thoughts and prayers remain with the Loudon County Sheriff’s Department, the community, and the family of Chris.