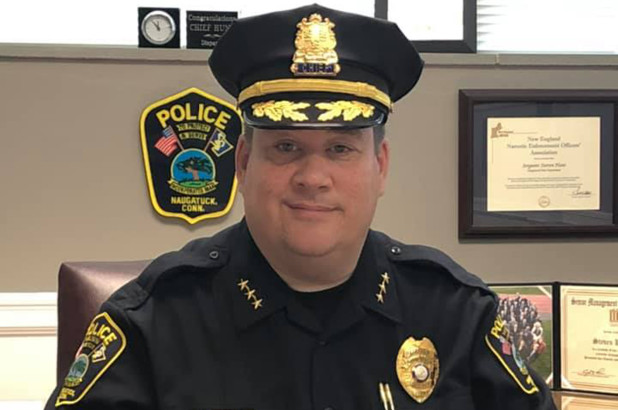 Naugatuck, Connecticut – Naugatuck Police Chief Steven Hunt is facing calls for his resignation after his teenage daughter’s Snapchat posts from two years ago emerged on Friday. According to a statement made by Hunt, his daughter was 13 years old when she allegedly sent the hateful messages.

“I’ll make my dad drive with lights and sirens and if we see any black people we will shoot them,” one post read,.

“My dad is now officially police chief so that means he’s more advanced in shooting black people then he was just a couple minutes ago.”

Jake Stankiewicz, 16, is a friend of the teen and he told WSFB that she sent him one of the messages when she was 14, adding he believes they were shared as a joke.

“They were sent to me, I had screenshotted them, and was told to delete them as I did, but they were backed [up] into my iCloud, which I discovered yesterday,” Jake told the station. “I just hope people in positions of power are more accountable for their actions and we can do something to combat the rampant racism everywhere.”

The posts are being called acts of “racism and bigotry” and there are calls for Hunt’s immediate resignation.

Jendaya Bell said that “No ‘meeting’ or ‘diversity committee’ will attack the racism embedded in this town head on. If you stand for what you claim to call for the resignation. Demand accountability. If there is no room in Naugatuck for racism and white supremacy, prove it. This will NOT be brushed under the rug.”

The city and police officials announced an independent investigation on Friday.

In that statement, officials said that “these comments are not consistent with Police Chief Hunt’s character and leadership of the department as well as the values he has instilled in our Police Department. Also, Mrs. Johnna Hunt has always been a model citizen and a great example for the youth of the community.”

Hunt’s wife, Johnna, is an Assistant Principal at Naugatuck High School and they are conducting their own investigation.

Chief Hunt and his wife issued in an open letter on Saturday that said their daughter was 13 years old at the time of the posts and “…were sent privately to a juvenile acquaintance, were despicable in nature and inexcusable.”

Hunt and his wife went on to say that “we condemn the comments made in these messages. In no way, shape or form do they reflect our hearts, minds or the love we have for all our neighbors in this inclusive community.”