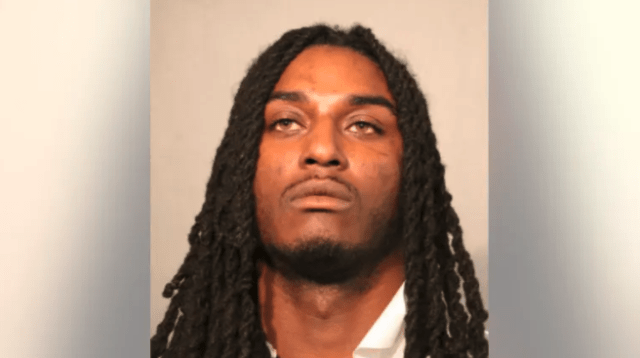 CHICAGO — A Chicago man was charged with attempted murder and a slew of other felonies after a police officer was shot in the face during a struggle on Monday, authorities disclosed.

Jovan McPherson was confronted minutes after he tried to kidnap a 21-year-old woman and then shot a Chicago police officer who was trying to take him into custody around 3:30 p.m. in the 1000 block of West North Avenue, according to police, FOX 32 Chicago reported.

McPherson, 23, was acting “erratically” inside an Ulta Beauty store when officers were summoned, CPD Supt. David Brown said. Upon police arrival, there was a struggle that continued into the parking lot.

During the tussle, McPherson reportedly fired three shots towards the officer, striking him once in the face.

Officers did not return fire during the encounter. McPherson was arrested at the scene and a handgun was recovered.

A gun was recovered from the scene where a Chicago police officer was shot in the face on Monday. (Chicago Police Department)

The officer was transported to Illinois Masonic Medical Center where he was treated and released around 7 p.m. Brown described the injury as a “through-and-through wound.”

In addition to the attempted murder charge, the Chicago Police Department revealed in a press statement that McPherson was tagged with six additional felony charges, which include aggravated battery of a peace officer, unlawful use of a weapon, kidnapping while armed with a firearm, aggravated unlawful restraint and resisting/obstructing.

In announcing the charges, Brown said McPherson’s bond hearing was scheduled for later in the day on Tuesday, FOX News reported.

The offender who shot our officer yesterday afternoon has been charged with attempted murder and six additional felonies, including kidnapping and unlawful use of a weapon. We did our job. It’s the court’s turn now. The offender's bond hearing is scheduled for later today.

Brown said responding officers were close to the incident because the department has stepped up patrols in the area.

Chicago Police Superintendent David Brown talks to reporters about an officer who was shot in the face during a response call Monday.  (Chicago Police Department)

The shooting occurred hours after CPD released its weekend crime figures. The data shows four people were killed and 22 were shot from 6 p.m. Friday through 11:59 p.m. Sunday.