Charges dropped against Buffalo officers involved with protester in June 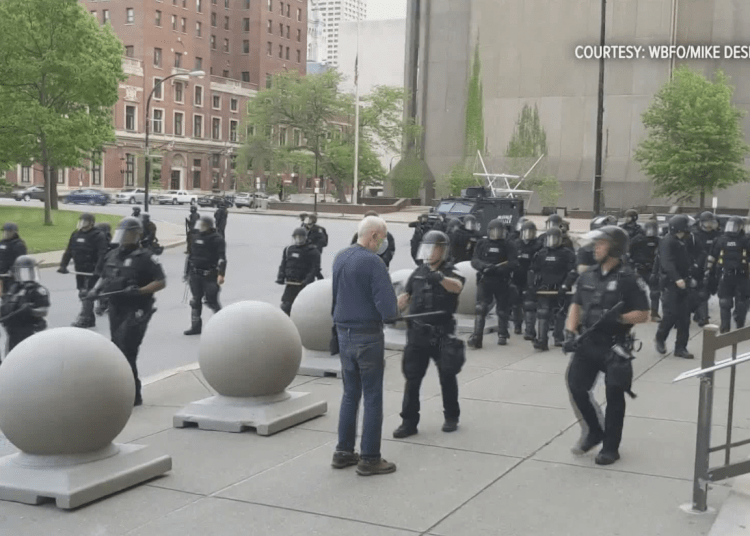 BUFFALO, N.Y. — Charges against the two Buffalo Police officers involved in a June incident where a protester was shoved to the ground while trying to impede officers have been dismissed, Erie County District Attorney John Flynn announced Thursday.

Aaron Torgalski, 39, and Robert McCabe, 32, had originally been charged with assault in the second degree, a Class D felon, WGRZ reported.

Martin Gugino was shoved by a Buffalo Police officer during a protest in downtown Buffalo in June of 2020. He suffered a fractured skull when he fell to the ground after he was pushed. The incident was caught on video by a reporter.

Gugino spent several days in the hospital with a head injury. He has since recovered.

In the context of violence, vandalism, looting, and arson, Mayor Bryron Brown described Gugino as “a key and major instigator of people engaging in those activities” in remarks he made at the time, Law Officer reported.

Nevertheless, both officers involved in the incident were quickly placed on administrative leave from the Buffalo Police Department. It’s unknown if they will be reinstated.

Flynn said the grand jury investigation took so long because the grand jury was shut down due to the COVID pandemic, and when it resumed again, Flynn said he had higher priority cases to tend to, WGRZ reported.

“The Buffalo Police Benevolent Association is extremely pleased with today’s decision by a grand jury to dismiss charges against Buffalo Police Officers Robert McCabe and Aaron Torgalski,” he said.

Law Officer is the only major law enforcement publication and website owned and operated by law enforcement. This unique facet makes Law Officer much more than just a publishing company but is a true advocate for the profession.
Share and speak up for justice, law & order...
Tags: Aaron TorgalskiBuffalo Police DepartmentJohn FlynnRobert McCabe