Following the 'near miss,' police chased the murder suspect on foot when an officer-involved shooting occurred 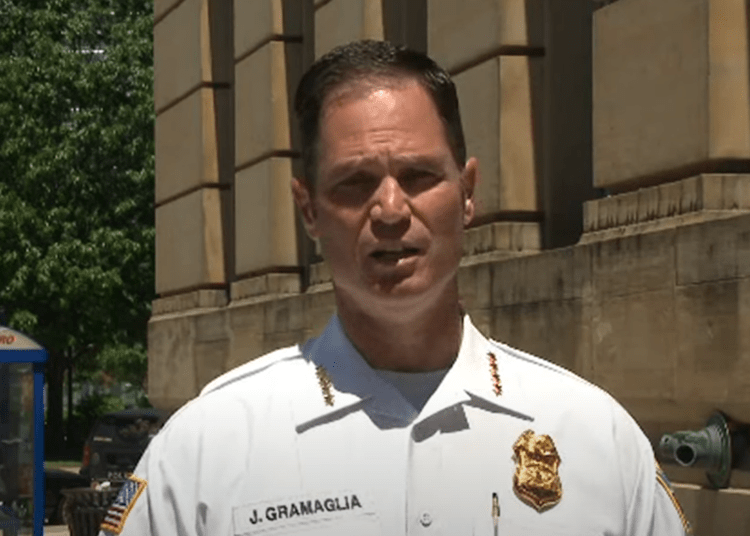 BUFFALO, N.Y. – Commissioner Joseph Gramaglia of the Buffalo Police Department said he is amazed that a murder suspect missed two police officers Friday night after firing his weapon through their windshield at “point-blank range.”

“Thank God he did,” Gramaglia said during a Sunday afternoon press conference, referring to the near misses, “or it would be a completely different story here.”

Patrol officers came upon the murder suspect immediately after a fatal shooting, he said. The victim was identified as 63-year-old Atlas Johnson. The suspect was identified as 27-year-old Nakeem Haynes, reported The Buffalo News.

The officers drove their police unit toward Haynes, who ended up on the patrol car’s hood after it struck a building. He then turned and fired into the windshield, Gramaglia said, just between the officers in the front seat.

After firing at officers, the suspect fled on foot, the commissioner said, while police chased the armed gunman.

A subsequent shooting occurred when the officers caught and confronted the suspect two blocks away. Consequently, Haynes was shot eight times in the chest, shoulder, side, lower back, and thigh, Gramaglia confirmed.

The officers administered first aid at the scene before the suspect was transported to Erie County Medical Center, where he remains in critical but stable condition, according to Buffalo News.

However, the commissioner said he is amazed that Haynes was on the streets in the first place. In 28 years of police work, he said, he has never seen such gun activity aimed at officers as in the past few months.

“I have a real issue with the fact that convicted felons on probation or parole are confident enough to pick up a handgun and walk around,” Gramaglia said. “This individual was on parole.”

“I can only guess that what was in this individual’s mind was that he had no fear of the criminal justice system,” he added. “He had no fears as to what was going to happen to him if he was caught with that gun. We need violent offenders behind bars.”

Despite Haynes’ medical condition, “he is expected to survive,” Gramaglia said, and remains in police custody.

He was released from state prison last October after serving time for illegal possession of a handgun, the commissioner said.

The officers were not injured by gunfire. They are on administrative leave as the case is investigated.