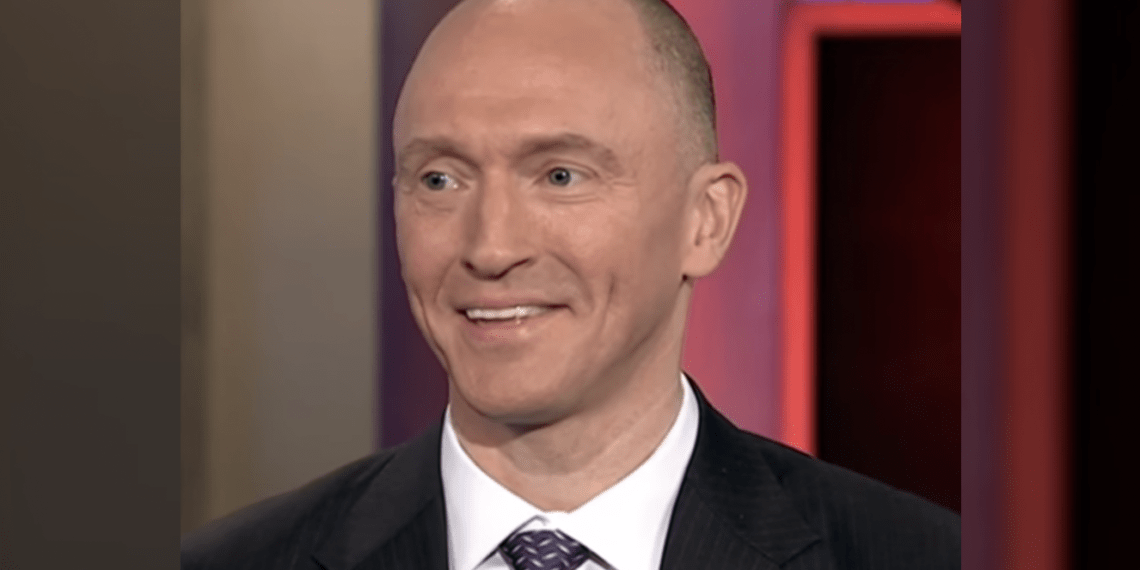 WASHINGTON — Carter Page on Friday sued the Justice Department, the FBI and former FBI Director James Comey for $75 million, insisting he was unlawfully surveilled as part of the 2017 special counsel investigation into so-called Russian collusion.

Also named as a plaintiff is former FBI lawyer Kevin Clinesmith, who this year pleaded guilty to falsifying an e-mail that was used by the FBI to obtain a Foreign Intelligence Surveillance Act warrant to monitor Page, Law Officer reported.

The surveillance “violated federal statutes enacted to prevent unlawful spying on United States persons, as well as the Constitution,” the lawsuit says.

Page is a former Moscow-based investment banker and was a foreign policy adviser for President Trump’s 2016 campaign.

The FBI had a wiretap on him for a year as a suspected recruitment target of Russian intelligence agents, The Post reported.

The FBI’s suspicions were based in part on allegations contained in the infamous dossier prepared by Christopher Steele and paid for by Hillary Clinton’s presidential campaign and the Democratic National Committee.

In seeking the warrants needed to wiretap Page, the FBI failed to independently investigate Steele’s allegations, the lawsuit asserts.

Furthermore, the FBI failed to disclose to the FISA court that Page had in fact been a CIA informant between 2008 and 2013, helping the agency “in combatting intelligence-related activities pursued by Russia and other foreign countries against the United States’ interests,” the lawsuit says.

“To persuade [the FISA court] that there was probable cause to believe that Dr. Page was a Russian agent, the Defendants provided false or misleading information” to the court, the suit says.

Mueller’s report found “numerous links” but no criminal conspiracy between the Russian government and the Trump campaign.

“The investigation did not establish that Page coordinated with the Russian government in its efforts to interfere with the 2016 presidential election,” the Mueller report said last year.

A report by Justice Department Inspector General Michael Horowitz further concluded that the FBI made 17 significant omissions or outright errors in its applications to the FISA court to surveil Page, The Post reported.

The IG said that despite the multiple errors, he found no evidence of political bias by the FBI when it opened the collusion probe.

This conclusion is arguable since McCabe, Strzok and Page have demonstrated a history of rogue behavior.

In January of 2020 it was learned that McCabe apologized for lying to federal investigators concerning an October 2016 leak to The Wall Street Journal about the Hillary Clinton email probe, Law Officer reported.

Strzok and Page drew notoriety for anti-Trump text messages sent during an extramarital affair while supposedly being “objective” during the course of the investigation.

Strzok, who was fired from the FBI in 2018, was one of the investigators who questioned former national security adviser Michael Flynn—pardoned this week by President Trump—about his discussions with Russian officials in 2017 and believed he lied about them, Law Officer reported.

Strzok was removed from then-special counsel Mueller’s team once those messages were discovered. A report from Horowitz said Strzok’s messages were inappropriate and “cast a cloud over the FBI’s handling” of the investigation into former Secretary of State Hillary Clinton’s private email server.

Earlier this month, McCabe conceded before the Senate Judiciary Committee that he would not have signed off on surveilling Page if he knew in 2017 what he knew now.

Law Officer is the only major law enforcement publication and website owned and operated by law enforcement. This unique facet makes Law Officer much more than just a publishing company but is a true advocate for the profession.
Share—and speak up for law & order...
Tags: Andrew McCabeCarter PageChristopher SteeleJames ComeyKevin ClinesmithLisa PagePeter StrzokSteele Dossier