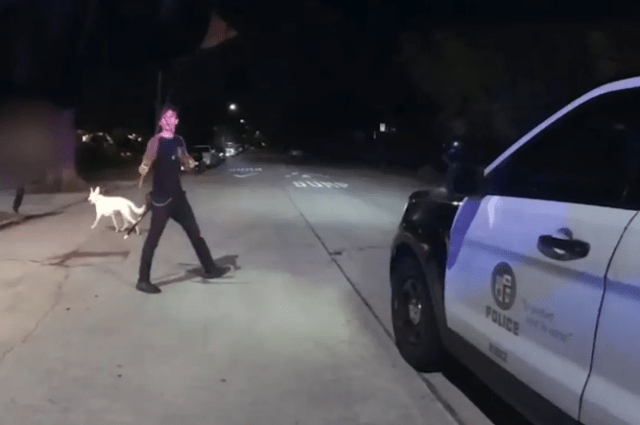 Eric Herrera was tased and arrested by police after reportedly slashing his mother with a samurai sword. (LAPD)

LOS ANGELES – The Los Angeles Police Department released bodycam video that shows the moment a suspect was tased and arrested by officers after he reportedly slashed his mother with a samurai sword Tuesday night.

Eric Herrera, 23, was charged with attempting to kill a 43-year-old woman that neighbors identified as his mother, according to the Los Angeles Times.

LAPD received multiple 911 calls around 11:20 p.m. regarding an ADW—assault with a deadly weapon—in the 1200 block of South Victoria Avenue.

When officers arrived in the Mid-Wilshire neighborhood, they saw Herrera on foot in the middle of the street holding two swords and ordered him to drop the weapons, video released by LAPD shows.

“Put it down,” officers command the sword-wielding suspect.

The suspect refuses to comply with officers orders and advances on police, so a Taser is deployed on the man, causing him to fall to the ground.

An officer immediately grabs one sword from his hands.

“Put that sword down,” the officer yells again as the suspect again raises the other weapon.

The suspect receives a second jolt from the Taser before he finally lets go of the second sword.

Once the suspect has been secured, the video cuts to officers responding to the victim who was found bloodied nearby. She has “multiple lacerations,” an officers notes.

“I’m bleeding everywhere,” the woman, covered in blood, tells officers as they apply a tourniquet for her wounds.

“It’s going to hurt okay? But the tighter the better,” the officer says as he places the tourniquet on her arm.

The woman also notifies police that her daughter is hiding in the house.

Police said the woman was transported to a nearby hospital and is in stable condition, according to the New York Post.

Initially, witnesses said a dog was also killed during the attack. However, that was unfounded, according to a family member, KTLA-TV reported.

Neighbor Josh Gordon, who lives across the street from the family, believes Herrera was having a mental health crisis. Gordon said the victim was attacked with what appeared to be large blades, “similar to a machete,” the LA Times reported.

“He did not seem to be in a lucid state,” Gordon said of the suspect. “He was moving and walking slowly. My main concern was the woman’s safety. There was a real sense of helplessness watching it happen from across the street.”

The woman was yelling for help and pleaded with the suspect to stop, Gordon said. At one point she implored, “I’m your mother,” according to Gordon.

LAPD did not confirm the relationship between the victim and suspect.

Herrera was booked for attempted murder at the Los Angeles County Jail early Wednesday. His bail was set at $1 million.