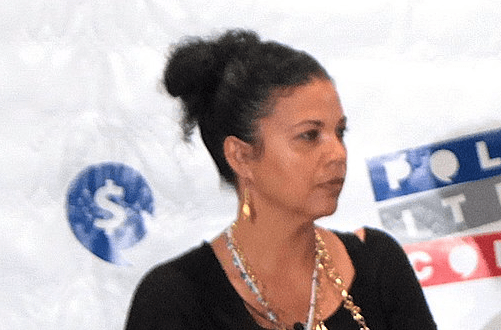 LOS ANGELES — Black Lives Matter organizers have filed a civil lawsuit against Los Angeles County District Attorney Jackie Lacey and her husband in connection with a March incident in which David Lacey is accused of pointing a gun at several demonstrators outside the family home.

“This lawsuit concerns the outrageously brazen and recklessly negligent use of a registered firearm by Defendant David Lacey, the husband of the Los Angeles District Attorney, against innocent protesters who were lawfully visiting their home and simply wanted the political candidate to follow through on promises she had made, yet neglected,” the suit reads.

Abdullah led a group of 30 to 40 demonstrators to the Laceys’ Granada Hills home before dawn on March 2, calling on Jackie Lacey to meet with them after she had reportedly failed to deliver on a promise to sit down with organizers that she had made in late 2019. The group chanted and prayed on the sidewalk before Abdullah, Ferlito and Marks approached the Laceys’ door and rang the bell.

The Laceys’ civil attorney, Jeffrey Zinder, questioned the timing of the lawsuit and alleged it was filed largely to harm the district attorney’s reelection bid. Jackie Lacey is seeking a third term in office and is facing a tough challenge from former San Francisco Dist. Atty. George Gascón, according to the Times.

“This lawsuit was filed two weeks before an election and not at any time in the last 7 months because it is being put forward for transparently political purposes,” Zinder wrote in an e-mail. “If there was merit in this lawsuit or if it was being offered sincerely, it would have been filed at some point prior to today.”