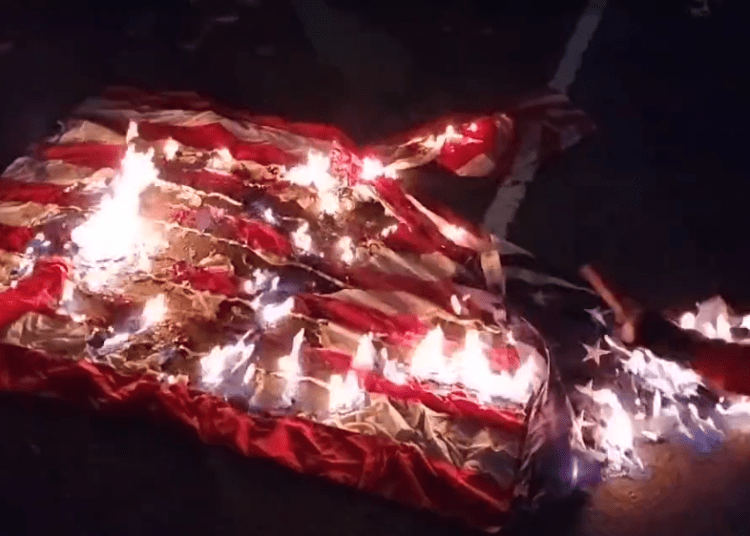 BLM radicals burned the American flag and disparaged police during a march in NYC. (Twitter)

BLM activists initiated the anniversary march at Union Square Park where they heard a series of propaganda speeches. The group then moved through the streets of the Big Apple chanting, “Every city, every town, burnt the precinct to the ground,” which is one of their common chants, the Post Millennial reported.

Black Lives matter activists take to the streets of NYC. And chant " every city every town burnt the PCT to the ground" pic.twitter.com/jKBlZWWJki

As the march proceeded, the group paused to burn an American flag, according to a video recorded by independent journalist Leeroy Press. The crowd amassed around the Stars and Stripes as flames burned through the material that represents our nation.

As rhetoric continued amid the sparks of the burning flag, one individual made the outlandish claim that law enforcement personnel are out “to kill” every single black and brown person in America, according to the video.

At the 2nd year anniversary of the death of George Floyd in NYC. an activist speaks out over the American flag while it's burning pic.twitter.com/4y6XAwGGp5

The marching continued as well as more anti-police rhetoric such as, “Hey hey, ho ho, these racist cops have got to go.”

BLM activists take to the streets of NYC for George Floyd second year anniversary of his death. They chant " hey hey ho ho these racist cops have got to go " #NYPD #BLM #GeorgeFloyd pic.twitter.com/3MZG70iVZf

Meanwhile, former President Barack Obama was harshly criticized after he made a foolish attempt to link the Texas school shooting massacre to the anniversary of George Floyd’s death.

As we grieve the children of Uvalde today, we should take time to recognize that two years have passed since the murder of George Floyd under the knee of a police officer. His killing stays with us all to this day, especially those who loved him.

“Former President Barack Obama showed how tone-deaf he is when he connected the 21 murder victims in Uvalde, Texas with George Floyd. … For Obama to mourn the anniversary of Floyd’s death in the same breath as 19 children and two teachers who were killed in a barrage of bullets in the Uvalde massacre is appalling.”

Jason Whitlock, the host of the podcast Fearless, issued a straightforward rebuke of Obama’s remarks: “Let’s stand George Floyd on the dead bodies of slaughtered children. This is one of the worst tweets in history.”

Pundit Matt Walsh put it succinctly by writing: “What in God’s name is wrong with you.”

“Those babies were truly innocent, he wasn’t. Let’s not put them in the same sentence of a man who’s untimely death was used to unleash a summer’s worth of chaos in the name of faux social justice,” he tweeted, referring to the months of protests that broke out after Floyd’s death.