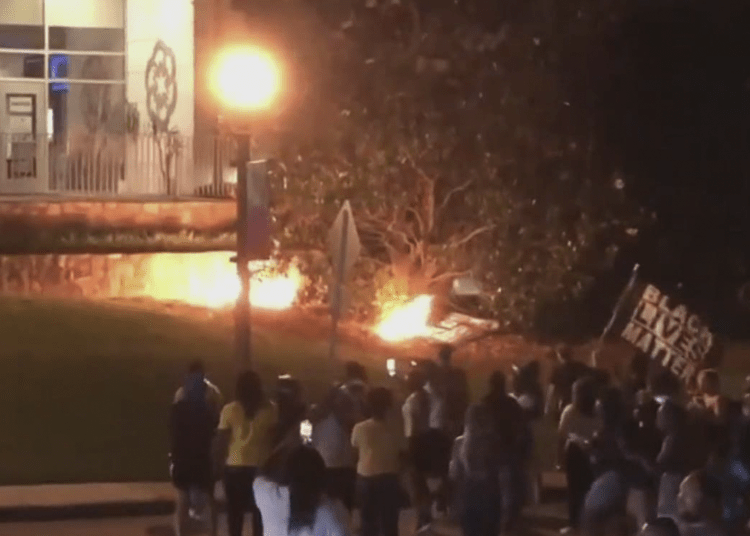 Rockhill, South Carolina – After a suspect was arrested for allegedly dealing drugs, Black Lives Matter protestors started a fire Wednesday night just outside the Rockhill Police Department main building. A woman on a megaphone was reportedly heard instructing protestors to block the road if firefighters arrived.

BLM rioters gathered outside the @rockhillpd building in South Carolina & carried out an arson attack. A woman on a loud speaker told people to block street if firefighters responded. BLM mobilized after police arrested an alleged drug dealer. pic.twitter.com/EHyrtUo0cD

On June 23, 2021, Officers of the Rock Hill Police Department Violent Crimes Unit were joined by the Department of Homeland Security to conduct operations in Rock Hill targeting violent and narcotic dealing offenders. Officers were conducting surveillance when at 1:56 p.m. they located and observed Ricky Roderick Price, a known offender, driving a black 2017 Mustang on Dave Lyle Blvd. Price made an illegal turn and changed lanes unlawfully, subsequently being stopped by Officers.

After a K-9 alerted to the presence of illegal narcotics in the vehicle, officers conducted a search and located two bags of Marijuana hidden in the driver’s door panel. Officers then placed Price under arrest and into handcuffs. A 9mm handgun was also located in the back seat of the vehicle.

Police and fire have arrived pic.twitter.com/ANd4jnlmo0

After the arrest of Price, he requested that his jewelry be passed along to someone else on scene. Officers removed his handcuffs to collect more jewelry when Price attempted to flee and threw several punches at officers, striking one officer in the face. After a significant struggle, Price was once again placed in custody.