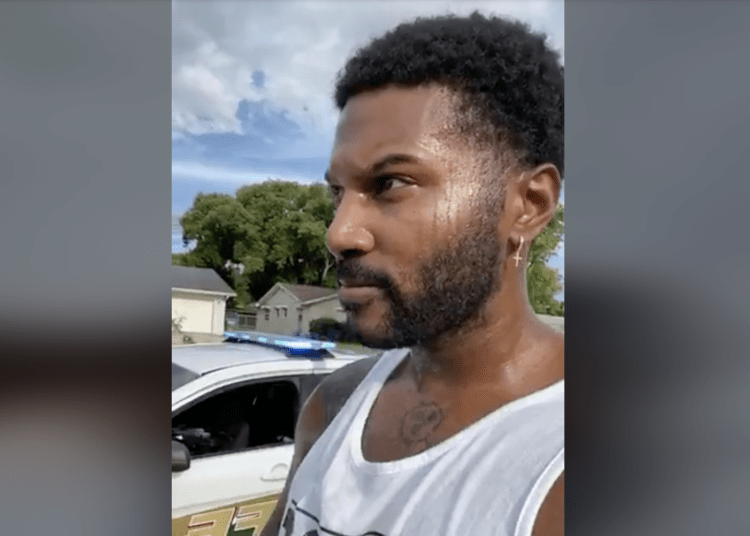 DELTONA, Fla. — Joseph Griffin was out for a jog late last month in a Deltona, Florida, neighborhood.

Griffin is former military police and currently works as a registered nurse. So when he was stopped by an officer, he responded as such a guy would — he was calm and cooperative.

“Deputies stopped him for fitting the description of a burglary suspect they were searching for,” WSAV-TV reported. “The deputies said they were looking for a black male with a white tank top, dark shorts, and a beard — which Griffin matched.”

Griffin pulled out his phone and began livestreaming on Facebook.

“Just bear with me, because you fit the description,” a deputy is heard saying on the video. “I’m not saying you’re guilty, [but] my sergeant’s telling me to detain you.”

Griffin tells the deputy he “just had a daughter born two days ago.”

“Again, buddy, you’re not under arrest,” the deputy says.

Griffin moves to put his cell phone down as he is placed in handcuffs, but “the deputy then offered to hold Griffin’s cell phone for him to continue live streaming their interaction,” the station notes.

He keeps calm and tells the deputies, “With everything going on, it’s just a little bit scary.”

“See it through our eyes,” one deputy says, and later adds: “We appreciate you being very cooperative.”

“I’m not trying to get shot over this,” Griffin says with a smile before laughing.

“Let’s avoid that race card cuz’ it ain’t here, I promise you that,” the deputy says.

Another deputy brings the witness to the scene and he’s not a match, a deputy says. Griffin is subsequently released from handcuffs. “Wrong place, wrong time,” he says into his phone, again with a laugh.

The deputies then expressed their gratitude to Griffin that he remained calm, and apologized for the inconvenience, Daily Wire reported.

Volusia County Sheriff Michael Chitwood applauded both sides. “These deputies did an outstanding job given the limited information they had about a call in progress,” he said. “Likewise, Mr. Griffin was calm and cooperative even though he had reason to be frustrated with the inconvenience.”

Moreover, the sheriff was so impressed that he offered Griffin a job with the sheriff’s department.

“Mr. Griffin is a military veteran and a medical professional, and I told him we’d train and hire him as a deputy in a second if he ever wants a new job,” he said. “Everyone involved in this deserves recognition for a job well done.”

Watch the video below.

“Witness descriptions are never perfect, and these deputies did an outstanding job given the limited information they had about a call in progress. Furthermore, they arrested the suspect actually responsible for the burglary,” Chitwood wrote in a Facebook post.

“I don’t want this to be a bashing of the sheriff’s office, I want it to be an enlightening thing. Anybody can be profiled,” Griffin told the West Volusia Beacon.

“On the law-enforcement-compliance side, it’s a good example of how to handle yourself. If I wasn’t calm and respectful, it could have turned into something different,” he said. “There are multiple instances of the same thing that ends up with someone going to jail, getting a felony for assault, because they fight back.”