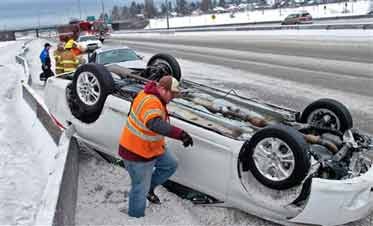 CHICAGO — Heavily bundled Midwesterners were shuffling quickly from place to place in a bid to spend as little time as possible outside in bone-chilling, subzero cold that was expected to last through Monday morning.

"It's so cold, it feels like needles are pricking my eyes," grumbled 19-year-old Ashley Sarpong of Chicago, a fur-lined hood pulled around her face Sunday as she crossed a wind-swept bridge that crossed the Chicago River. "This is the coldest I've felt all year."

The big freeze was expected to last through Monday morning, the first full day of the official winter season, when wind chill advisories for the region were to expire.

Snowfall was scant after the frigid air mass rolled in, but ice and high winds whipped up snow along roadways and made driving hazardous for holiday travelers.

But the worst danger was from the cold — exacerbated by 20-to-30 mph winds that drove wind chills to 25 degrees below zero, or even lower, according to the National Weather Service.

Social service workers in Chicago conducted well-being checks and hosted more than 100 people in an overnight warming center, while officials activated an automatic phone message system that called residents to warn them of the cold.

At kickoff in Cleveland for the Browns-Bengals football game, the temperature was 18 degrees with winds up to 40 mph. Temperatures dipped to minus-6 degrees in two Iowa cities, with wind gusts of 40 mph that made it feel like 35 below zero in areas.

The gusty winds and cold also added to power-outage headaches, with more than 7,100 Ameren customers without power Sunday night, mostly in the Peoria area. In northwest Ohio, more than 6,000 homes were without power.

In southwestern Michigan, about 30 vehicles were involved in a deadly series of pileups on a six-mile stretch of Interstate 94 north of Stevensville, about 175 miles west of Detroit. An Illinois doctor died when his car slammed into a semi-truck that had stopped on the highway in whiteout conditions.

Police in west Michigan asked motorists to stay off the roads and many obliged; more than 400 church services and other events were canceled Sunday.

"We have a blizzard. We just can't see anything," said Sheila Hyde, an emergency dispatcher for Ottawa County along the hard-hit Lake Michigan shoreline. "I think people have finally figured it out and are staying home."

Flights were canceled and delayed at airports on both coasts. Hundreds of travelers were stranded at airports in Phoenix; SeaTac, Wash.; and Arlington, Va.

"The thing that makes me angriest is that they're not giving us hotel vouchers, because of the weather," said Rebecca Gray of South Berwick, Maine, who was staying the night at Reagan National Airport with her 3-year-old daughter and 5-year-old son. "I've got my baby sleeping on the floor upstairs. Maybe if they brought us some water to drink or anything."

The winter blast continued to be felt in the Pacific Northwest. In Seattle, the National Weather Service was predicting up to 4 inches more by the Monday morning commute — a lot in a city with few plows and hilly streets.

Over the weekend some revelers took advantage by going cross-country skiing on biking or walking trails in the city, and others sailed down closed, snow-covered roads on makeshift sleds.

The heavy snow was believed to have caused the collapse of a large tent over a temporary ice-skating rink in Bellevue, Wash., briefly trapping some of the 10 people inside and slightly injuring one girl. Snow was also suspected in the collapse of an unoccupied building housing a storage business in rural Waitsburg in eastern Washington.

In Portland, the streets of downtown were mostly empty, with pedestrians only occasionally forced to the unshoveled sidewalks to make room for slow-moving cars. Motorists were told to use chains on state highways.

"It is amazing," said David Thompson, spokesman for the Oregon Department of Transportation. "You say to yourself: 'That's Portland?' The roads are snowpacked, covered with ice and it's freezing rain."

Even hardy Minnesotans buckled to the cold, calling off a Minneapolis holiday parade Sunday that is automatically canceled if the wind chill dips below minus 20.

Authorities in Boston, no stranger to chilly weather, canceled public schools Monday and Tuesday in the face of an overnight freeze and wind gusts of up to 50 mph.

In North Dakota, the National Weather Service said Bismarck was on track to break a 1916 record for snowfall in December. The city has had 19 inches of snow so far this month, and with 4 more expected Monday night, the record of 21.7 inches could be shattered.