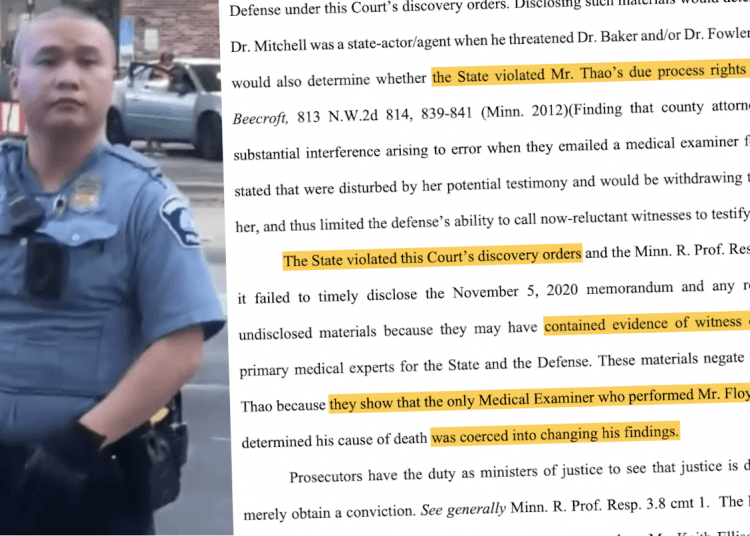 MINNEAPOLIS — Attorneys for Tou Thao, the former Minneapolis police officer charged with playing a role in the death of George Floyd, Jr., filed an explosive motion Wednesday which accuses the top official responsible for Floyd’s autopsy of being “coerced by the State and its agents” into changing his professional assessments of Floyd’s condition into medical opinions that were favorable to the prosecution at trial.

Thao’s defense alleges that a fellow forensic pathologist threatened to publish a negative article against Hennepin County Chief Medical Examiner Dr. Andrew Baker unless Baker conceded that Floyd died in part from “neck compression” by ex-officer Derek Chauvin, who has since been convicted of murder. The attorneys go on to argue that the alleged strong-armed tactics have prevented the defense from securing experts willing to testify on Thao’s behalf, Law&Crime reported.

According to a 9-page court document filed Wednesday, May 12, Thao’s attorneys, Robert M. Paule and Natalie R. Paule, are accusing Dr. Roger Mitchell, the “former Medical Examiner of Washington D.C.,” of leveraging Baker by placing a phone call sometime between May 29, 2020, when Baker released a preliminary statement about George Floyd, and June 1, 2020, when Baker signed his findings as to the cause and manner of Floyd’s death. (The full autopsy was released publicly on June 3, 2020.)

During the supposed call, Baker is alleged to have said that “he didn’t think the neck compression played a part” in Floyd’s death. Mitchell is alleged to have suggested that Baker “should fire his public information officer” for issuing the May 29 preliminary statement which said, in part, that the medical examiner’s autopsy “revealed no physical findings that support a diagnosis of traumatic asphyxia or strangulation,” according to Law&Crime.

“After the phone conversation between Dr. Mitchell and Dr. Baker, Dr. Mitchell decided he was going to release an op-ed critical of Dr. Baker’s findings in the Washington Post,” Thao’s court document alleges. “Dr. Mitchell first called Dr. Baker to let him know.”

Mitchell is alleged by Thao’s legal team to have said the following to Baker in a subsequent conversation:

[Y]ou don’t want to be the medical examiner who tells everyone they didn’t see what they saw. You don’t want to be the smartest person in the room and be wrong. Said there was a way to articulate the cause and manner of death that ensures you are telling the truth about what you are observing and via all of the investigation. Mitchell said neck compression has to be in the diagnosis.

Video of Floyd’s death had been rampantly circulating since at least May 26, 2020.

According to the motion, Mitchell met with prosecutors on November 5, 2020, and allegedly told the state he published the op-ed on Facebook. Defense attorneys wrote in Wednesday’s court filing they don’t have the op-ed and that it remains unclear whether Mitchell’s meeting with prosecutors was recorded.

Thao’s defense attorneys argued a connection between the alleged coercion and Baker’s actual testimony in the trial of co-defendant Chauvin. From their motion:

During Dr. Baker’s testimony in the case of State v. Chauvin, Dr. Baker testified to the
following:

a.  That he conveyed to the State on May 26, 2020 in a meeting that the autopsy of
Mr. Floyd showed no anatomical evidence of asphyxiation.

b.  That he previous[ly] testified under oath in other proceedings regarding the death of Mr. Floyd.

One of Chauvin’s defense experts, Dr. David Fowler, testified that Floyd’s manner of death was undetermined, Thao’s defense motion pointed out. As an alleged result of Fowler’s testimony, Mitchell subsequently penned letters to various federal and state officials asking, among other things, for an investigation into Fowler‘s medical license, the motion says. “Less than 24 hours after receiving the letter, the Maryland Attorney General’s Office announced that there should be a review of all in custody death reports produced by the Office of the Chief Medical Examiner during Dr. Fowler’s tenure,” Thao’s attorneys stated.

The retired forensic pathologist also said the fentanyl and methamphetamine in Floyd’s system, and possible carbon monoxide poisoning from auto exhaust, were contributing factors in his death, Law Officer reported.

Several weeks ago, Fowler defended the work of his office, noting that he was not solely responsible for autopsy conclusions. “There’s a large team of forensic pathologists, with layers of supervision, and those medical examiners always did tremendous work,” Fowler said at the time. He declined to discuss his testimony in the Chauvin trial.

“There is no discovery disclosed condoning Dr. Mitchell’s intimidation and coercion,” the Thao defense filing reads. “This includes no documentation that the State reported Dr. Mitchell to the pertinent medical board(s) for his behavior and potential criminal activity.”

The defense then pivoted away from factual allegations and into legal arguments. The attorneys’ tone appeared sharp:

The State – specifically prosecutors Lola Velazquez-Aguilu, Joshua Larson, Matthew Frank, Erin Eldridge, and Corey Gorden – knew that a potential expert witness had coerced the State’s main expert witness/the only expert to perform the physical autopsy in the case of State v. Thao. The State did nothing in response to this coercion. Instead, the State knowingly allowed Dr. Baker to take the stand in State v. Chauvin and testified to coerced statements.

The defense then accused Mitchell of committing a crime, according to Law&Crime.

Under Minn. Stat. § 609.27 subd. 1(3) Dr. Mitchell’s conduct meets the elements to be found guilty of committing the crime of coercion. Dr. Mitchell orally made the threat to unlawfully injure Dr. Baker’s trade unless Dr. Baker changed his autopsy findings. Dr. Mitchell told Dr. Baker to include neck compression in the final findings and warned Dr. Baker he was going to publish a damaging op-ed in the Washington Post. After Dr. Baker changed his findings, Dr. Mitchell did not publish the op-ed. Moreover, Dr. Mitchell unlawfully injured Dr. Fowler’s trade by penning an open letter which resulted in an investigation into every death report in Maryland during Dr. Fowler’s tenure.

Dr. Mitchell has set the stage that he will threaten the trade and professional reputation of any physician who suggests that Mr. Floyd’s death could be labeled as “undetermined”.

Dr. Mitchell has essentially stated that any medical expert who wants to testify that Mr. Floyd’s death could be undetermined should, and will, face penalties by him. Dr. Mitchell’s accusations and spurring of legal fallacies creates a chilling effect for Mr. Thao and violates his due process rights in that it has become extraordinarily difficult to find medical experts who are willing to state that Mr. Floyd’s death was undetermined in fear of their professional reputation and licensure.

The defense argued that the state failed to disclose this information under applicable discovery laws.

As a remedy, the defense is asking for the charges against Thao to be completely dismissed. In the alternative, the defense is asking, among other things, for a group of prosecutors — including Minnesota Attorney General Keith Ellison and former Principal Deputy Solicitor General Neal Katyal — to be kicked off the case for alleged ethics violations.

Law&Crime reached out late Wednesday to the Hennepin County Medical Examiner’s Office and to the office of Attorney General Ellison. The Hennepin County Medical Examiner’s Office responded Thursday morning and said it could not comment on pending litigation. Law&Crime reached Dr. Roger Mitchell by email on Thursday. He did not have any comment. They have yet to hear back from Attorney General Ellison’s office.

A judge has not ruled on the defense request as of the time of this report. Dr. Mitchell has been neither charged with nor convicted of a crime, including coercion, with reference to his alleged activities in the Floyd case.