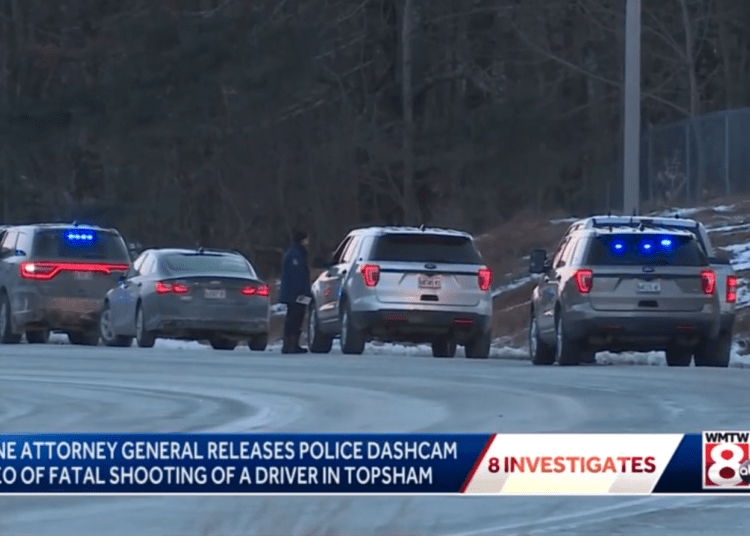 STOPSHAM, Maine — The attorney general of the state of Maine has released a portion of police dashcam video showing the final few minutes of a standoff that police had with a woman prior to a fatal shooting.

Law enforcement authorities were involved in the shooting with Kourtney Sherwood, 37, on the afternoon of Feb. 28, in Topsham, Maine, WMTW reported.

Police engaged the woman in a lengthy standoff as she sat in her pickup truck on the side of the Topsham-Brunswick bypass along Route 196, near the Merrymeeting Bridge.

Sherwood remained at the location after reportedly being cited by a state trooper.

Once the trooper cleared the traffic stop, Sherwood called her life partner, Stacy Beverage, in distress threatening to take her life.

Before the dashcam video was released, Beverage told the local news outlet that Sherwood had a long history of mental illness.

The trooper had issued Sherwood two traffic summonses; one was for driving without a valid license, said Maine State Police spokeswoman Shannon Moss.

“She said, alright, I’m going to jail, someone needs to come to get the truck,” Beverage said.

However, there was no arrest and the trooper left.

Meanwhile, a distressed Sherwood remained parked by the side of the road.

Sherwood told Beverage on the phone, “I’m gonna jump off the bridge, or I’m gonna friggin’ shoot myself or shoot somebody. You just need to get here!”

As a result, Beverage called police, letting them know that Sherwood was in possession of a weapon.

Law enforcement personnel responded and had a lengthy standoff with the woman. It was unclear how long the impasse lasted. Maine’s Attorney General Aaron Frey only released the final 2 minutes and 19 seconds of the dashcam video.

“Kourtney, all the officers here, we all want to get you some help. we don’t want this to end badly,” said Sagadahoc County Sheriff’s Deputy Steve Thibeault over the PA system on his patrol unit as he tried to talk Sherwood out of her truck.

Thibeault said, “We want you to go back to your partner. She’s very concerned. We’re concerned for you.”

At approx. 2 minutes and 11 seconds into the video, Sherwood displays a firearm out of the driver’s side window. That is when the officer-involved shooting occurred as one gunshot can be heard.

According to WMTW, Sherwood was shot once by Topsham police officer Mathew Bowers and died the next day.

Maine law requires the Attorney General to release any video documenting any police fatality within 30 days of the incident, and the dashcam video is the only one in that category, said Nicole Sacre, a spokeswoman for the AG’s Office.

The state medical examiner has yet to announce a cause of death or release autopsy results. AG Frey has six months to complete his investigation.