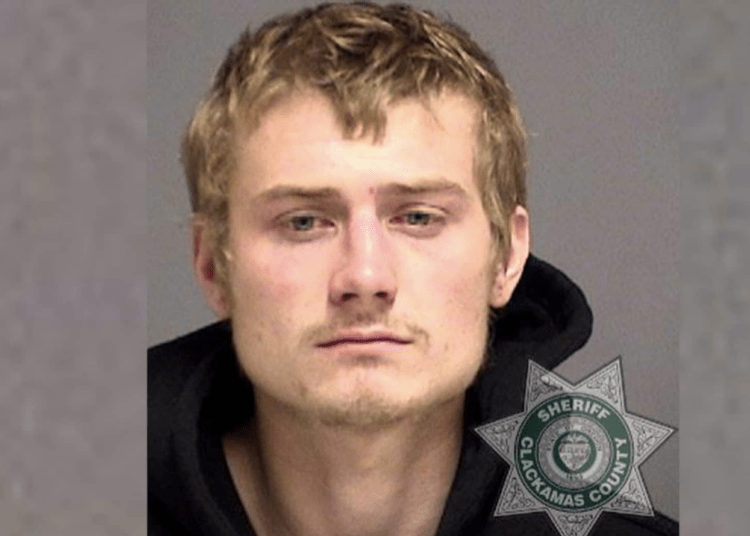 David Dahlen, 24, of Portland was arrested for the attempted murder of a police officer Saturday before escaping from a holding cell. (Portland Police Bureau)

PORTLAND, Ore. — The Portland Police Bureau said Monday that a cleaning crew’s mistake likely led to the escape of an attempted murder suspect who is accused of ramming a police officer in the city last month.

The suspect, David Dahlen, 24, was arrested on Saturday and transported to Central Precinct where he was placed in a holding cell in the Detectives Division.

While Dahlen was in a holding room, police said two contracted cleaning crew members were disinfecting the Detective Division when one of them opened the door to the holding room. The worker closed it after realizing the room was occupied.

“Preliminary investigations leave investigators to believe that the door did not fully latch after it was closed,” police said in a news release. “Sometime after the cleaning crew members left, investigators believe Dahlen pushed the door from the inside, found it to be insecure, and got out.”

Investigators believe Dahlen found a stairwell that was unlocked for fire safety reasons before he exited the building through a side door.

Just minutes later, members of the Detective Division discovered he was gone. Police said the building was locked down and — after reviewing surveillance footage — determined that Dahlen had already exited the building.

A manhunt was still underway Tuesday after efforts to monitor local transit and downtown areas proved to be unsuccessful, according to authorities.

On Dec. 24, Dahlen is accused of driving a stolen truck into Officer Jennifer Pierce at a gas station in the city. Police said Dahlen rammed into Pierce as she and other officers attempted to box in the stolen vehicle, trapping her between the truck and her patrol car, Law Officer reported.

Pierce — a 15-year police veteran — fired her weapon at the stolen truck after being struck by the vehicle a second time. She was later transported to a local hospital with a fractured pelvis. The stolen truck was found abandoned about an hour later in southeast Portland.

Following Dahlen’s escape, the PPB said it will conduct “a comprehensive internal review of our procedures regarding holding cells,” Fox reported.

“It will contain recommendations for improving those procedures to prevent anything like this from happening again,” authorities added.