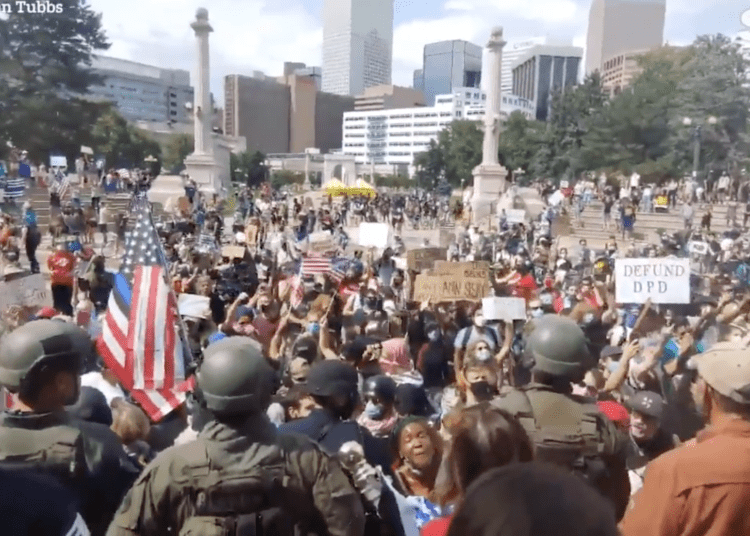 DENVER — A large crowd of anti-police agitators descended on a Back the Blue event in Denver on Sunday afternoon, blowing whistles, banging drums and, in some instances, throwing punches, forcing police to intervene before the gathering was effectively shut down early, according to the U.S. Sun.

The sixth annual Law Enforcement Appreciation Day event was scheduled to be held Sunday from 3 to 6 p.m. at the amphitheater in Civic Center Park in Denver. It was advertised by the Pro Police Rally Colorado Facebook page.

Randy Corporon, an attorney who helped organize the “family-friendly” event involving food and live music by Becker Band, said Denver Police Chief Paul Pazen had asked him to either reschedule or move the pro-police gathering from its normal location, citing a risk that officers could be put in danger as Black Lives Matter demonstrators planned a counter-protest also at the Civic Center Park.

“He was agitated that we’re going to get his officers hurt,” Corporon told the Denver Post.“My response to him was that he should allow his officers to do their job and if people are down there breaking the law, to stop them. Because they’ll have nothing to fear from us.”

“We’re exercising our constitutional right to peacefully assemble, and we have no intention of giving up that ground to these domestic terrorists,” he said before the event. “This chief of police is the guy who walked hand-in-hand with Black Lives Matter.”

“If you agree that the domestic terrorists don’t own the streets and our parks in my birthplace, once beautiful Denver Colorado, please join me,” Corporon tweeted Saturday advertising the event the next day.

If you agree that the domestic terrorists don't own the streets and our parks in my birthplace, once beautiful Denver Colorado, please join me, @michellemalkin@stevereams and a cast of thousands Saturday pm at 3.

Shortly after the band began to play around 3 p.m. on Sunday, anti-police demonstrators, who greatly outnumbered the group who had shown up to show their support for law enforcement, moved into the amphitheater space and banged drums, blew whistles, clanged pots, clapped and shouted obscenities to drown out the music, according to the Denver Post.

As a result of the clash, several people threw punches. Photos showed clashes between women from opposing sides pulling each other’s hair. One man was bloodied and had a large gash in his forehead, Fox News reported.

Denver police were unsuccessful keeping angry agitators away from Back the Blue crowd. Officers later confirmed they used chemical sprays in at least three separate instances to help disperse the crowd.

Acting Deputy Homeland Security Secretary Ken Cuccinelli reacted to the “Outrageous violence” seen in Denver Sunday, tweeting “These tyrannical, left-wing anarchists hate free speech. If you do not agree with them, they believe you must be beaten down – literally.”

Outrageous violence. These tyrannical, left-wing anarchists hate free speech. If you do not agree with them, they believe you must be beaten down – literally. @michellemalkin https://t.co/aiyJqQTtxm

Most of the people showing support for law enforcement had left within an hour. Anti-police demonstrators also stood in front of a police vehicle to prevent it from leaving, the Post reported.

The counter-protest was organized by Party for Socialism and Liberation, and other Black Lives Matter supporters, including the Afro-Liberation Front, according to KMGH-TV.

Lillian House, an organizer for the Party of Socialism and Liberation, said any celebration in support of police is “unacceptable” and “just all around out of touch with the struggles people are facing.”

“There’s not much else to say other than every cop here is a terrorist by association,” Hale Rardin, a Black Lives Matter supporter at the scene, told the station.

One person was arrested for assault. Police said a supervisor was at the scene to ensure the two pepper ball deployments and one hand-held fog device deployment were carried out according to the department’s policy.

“Our goal is to make sure everybody has the ability to exercise their First Amendment rights. Those tools are used only if there is some sort of disruption or threat to safety,” Denver police spokesman Tyrone Campbell told the Post.

In response to the criticism against law enforcement, Pro Police Rally Colorado founder Ron MacLachlan said his group is not against police reform or Black Lives Matter advocating for racial justice but made a distinction that “We’ve got to stand with our men and women in law enforcement. Without them, we are in chaos and anarchy.”

“The idea that these people have been around for the last six weeks going out and terrorizing different neighborhoods for a couple hours at a time, that’s not acceptable,” he said, referring to the civil unrest that’s unfolded since George Floyd died in police custody in Minneapolis in May, Fox reported.

Before the event Sunday, MacLachlan said the pro-police gathering was not just for officers but also for their families. He pondered, “What kind of home are they in when they have that kind of tension going on inside their lives?”