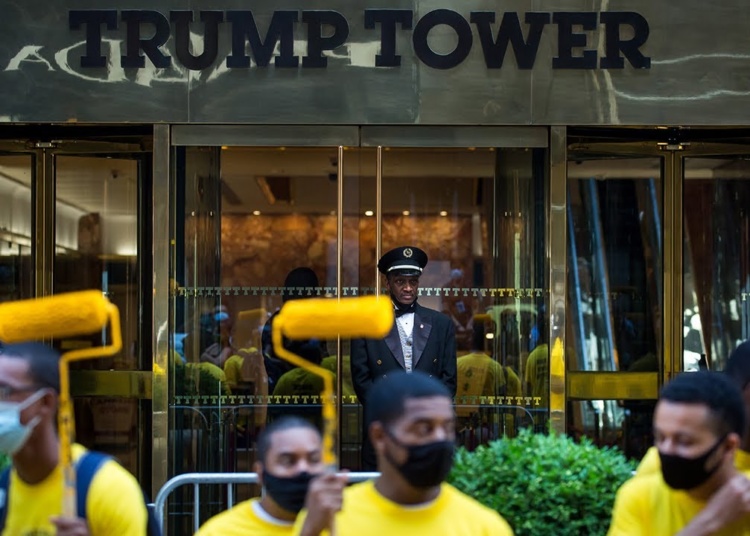 New York 4 reported that police waited outside Trump Tower on Fifth Avenue for more than seven hours, but painting crews from the NYC Department of Transportation never showed up on the first day.

MAXINE WATERS PULLS OVER, CHECKS ON DEPUTIES STOPPING ‘A BROTHER’

The mayor blamed “logistics” for the abrupt postponement.

De Blasio offered vague details on the use of city personnel for the project.

The use of NYPD members on the Black Lives Matter Mural cost city taxpayers “thousands of dollars” just hours after de Blasio committed to slashing the department’s overtime budget by $352 million.

One local government official said the move defies logic by antagonizing the president at a time when the city is desperate for a multi-billion dollar federal bailout. “It’s a publicity stunt without an end game,” the official said.

Others said that by using tax payer dollars to paint a “political” message, opens up the door for others and potential litigation.

The conservative group Judicial Watch sued the mayor of Washington D.C. Thursday for ignoring a request to paint their motto “Because no one is above the law” on district streets.  The group says the motto is intended to apply equally to law enforcement, protesters and looters.

Mayor de Blasio’s mural was ruined for the FOURTH time! I’m a big supporter of law and order and feel very strongly that laws cannot be selectively enforced so I do not condone any vandalism. HOWEVER, I’d be lying if I said this didn’t make me smile…?
pic.twitter.com/bWt8G1E210

A similar suit against New York City could be next. In a June 30 letter to Mayor de Blasio, Judicial Watch President Tom Fitton said “Because city streets are now being used as public fora for expressive activity, we would like to have our motto painted along a street, preferably Fifth Avenue between 81st and 83rd Streets.”  Fitton says his group would pay for the painting but added “we would likely need the assistance of the city to aid in traffic diversion.”

Despite the unprecedented fiscal crisis facing the city, the mayor insists the Black Lives Matter message is worthy of tax dollars.