Seattle Police Department: 'These are criminal acts, not peaceful protests' 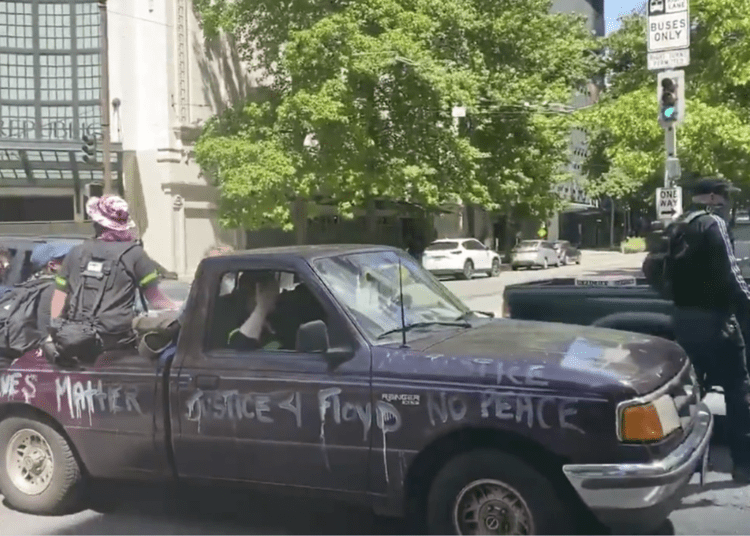 SEATTLE — At least a dozen Seattle police officers were injured on Sunday as rioters attacked multiple police precincts, a municipal court, an Amazon building, and a Starbucks.

The Seattle Police Department said the rioters “were responsible for a significant amount of property damage to government buildings and private businesses” and that “at least a dozen officers were injured,” The Daily Wire reported.

Seattle police said that “Arson/Bomb detectives” were involved in the department’s investigation into the attacks by the extremists, which authorities said “appeared to be very organized and this appeared to be a very concerted effort at property damage of certain businesses and government facilities.”

Local journalist Katie Daviscourt tweeted a video that showed an Amazon Go building being attacked and wrote: “Antifa Militants and Black Lives Matter rioters are breaking into Amazon Go Downtown Seattle. This protest has turned into a riot.”

The Seattle Police Department tweeted out photographs of some of the damage, writing: “Demonstrators went from Westlake Park to the Municipal Courthouse and then headed back north to the West Precinct…leaving behind a trail of property destruction. These are criminal acts, not peaceful protests.”

Demonstrators went from Westlake Park to the Municipal Courthouse and then headed back north to the West Precinct…leaving behind a trail of property destruction. These are criminal acts, not peaceful protests. pic.twitter.com/7GYkDxAg9s

Other videos that were posted online showed severe damage at Starbucks and other stores.

Antifa wrecked a Starbucks in Seattle during an anti-ICE "protest." pic.twitter.com/ALXgkfjc3l

On Sunday, Antifa militants in Seattle attacked several Starbucks cafes, looted a Walgreens and an Amazon Go. In the Starbucks on Broadway and E Denny Wy, the militants set off a smoke bomb after smashing the windows and wrecking the interior. pic.twitter.com/UU7rS8tyB1

Seattle Mayor Jenny Durkan has yet to issue any kind of a statement about the violent riots, the destruction of property, the attacks on government buildings, or the dozen police officers who were injured, Daily Wire reported.