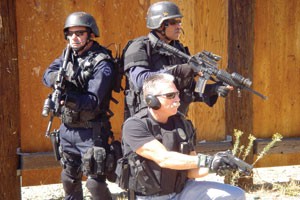 All That Glitters is Not Gold

All That Glitters is Not Gold

I started working armed security in 1980 while attending university. Dissatisfied with the little to nonexistent training, I attended a 120-hour security officer program when it was offered that fall. The program, taught by local law enforcement officers, included firearms and suspect control training. I can still remember the chief from a local PD who was our firearms instructor. He would walk down the line behind us demonstrating his martial arts prowess by doing crescent kicks in the air … sigh. This was the time of Police Pistol Combat (PPC) and much of our training revolved around those events with a lot of time spent at 25 yards. I had already learned to shoot a revolver from my uncle. A former Marine sergeant with combat experience in Okinawa, he was primarily a one-handed “shove and shoot” handgun shooter. Additionally, he taught me the “cup and saucer” method, wherein the support hand cups the gun hand.

After the security officer program ended, I still felt that there must be more and so began what has turned into a lifelong study into small arms training and research.

The Modern Technique
Jeff Cooper, former Marine lieutenant Colonel, college professor, writer and instructor, had formulated his training doctrine based on personal use of the pistol in a couple of handgun shootings, experience with military pistol training of the time and throughout history, observation of FBI handgun training at Quantico Marine Base in Virginia, and competitions known as “leather-slaps” in Big Bear, Calif. Cooper observed how one shooter, Jack Weaver, brought the pistol up to eye level in a two-hand hold and consistently beat out the competition. Cooper began using Weaver’s stance and found he was winning as well.

Cooper founded his American Pistol Institute (now known as Gunsite) in Paulden, Ariz. in 1976. Cooper was a prolific writer throughout his years and I can remember digesting his articles in gun magazines in the early ’80s. (By the way, Cooper’s books and articles are still relevant and worth reading today.)

The modern technique of the pistol incorporates five elements:

1. The large caliber semi-auto pistol
2. The weaver stance
3. The flash front sight picture
4. The compressed surprise trigger break
5. The presentation of the pistol from the holster

Chuck Taylor, former operations manager for Gunsite, wrote The Complete Book of Combat Handgunning in 1982 and I ordered a copy. That same year, I also ordered a copy of Colonel Rex Applegate’s Kill or Be Killed. Applegate was a point shooting proponent, but his version made a lot of sense because it was eye-level vs. hip shooting.

In 1982 I attended my first police academy and starting work as a Deputy Sheriff. The Weaver Stance was the way I shot back then and it served me well for years.

There were no firearms training videos and there was no Internet or YouTube, so training was all about personal instruction when/if you could get it, or traveling to Gunsite. You could also read about firearms training in magazines and books. There were other traveling instructors—Mas Ayoob, Chuck Taylor, Ken Hackathorn, John Farnam and others––but for a young deputy I could neither afford to attend their training nor head to Gunsite.

Change
Over the years I’ve modified my stance to a modern isosceles for more control. I’ve had training from Ron Avery, Todd Jarrett and members—past and present—of LAPD/SWAT, as well as attended programs at Blackwater, Sig Sauer Academy and the Federal Law Enforcement Training Center among many others.

During those intervening years from ’82 until today, I’ve purchased about every major book on firearms training and shooting, as well as amassed a fairly large video and DVD collection on the topic. In 12 ½ years on SWAT and more than 24 years as an urban police officer, I’ve pointed all manner of guns at a large number of people and have even been on the two-way range a time or two. I’ve had a fair number of students who’ve been in shootings as well. That said, I’ve looked at “new” stuff as it develops, compared it to “old” stuff and formulated my own opinions about what works for me and others.

Many “older” instructors and the “old” style of shooting and combat use of firearms have been getting a bad rap lately. I have nothing but admiration for combat vets of the Global War on Terror who have begun instructing. There are some great folks out there—Kyle Lamb, Paul Howe, Dave Harrington and Larry Vickers to name a few—who are excellent instructors and have extensive military special operations backgrounds.

I do take issue with the guerilla marketers who attempt to further their agenda and profit by bashing people no longer around—like Cooper and Applegate, for instance. These instructors attack the modern technique, Cooper and anything else they deem outdated, old or unworthy. Funny, as this column’s previous author, Dave Spaulding, has pointed out, there isn’t much that hasn’t already been done in firearms training.

I also hear that “All this competition related stuff is junk! I need to learn from someone who’s ‘been there, done that’ in combat!” I believe that Lamb, Harrington, Hackathorn and Vickers, as well as others have competition experience, and until you’ve experienced the stress of a match and done well despite it, your opinion is rather hollow. Consider that Ron Avery, Bill Rogers and Jerry Barnhart—all Master Level competition shooters—have been responsible for training most high-speed, low-drag military and law enforcement trainers and operators nationwide. Consider that maybe those “old guys” made it to their senior years for a reason. They knew what they were doing and practiced the basics, “pressure tested” their art in competition, and have a highly developed awareness of their environment and an intense will to win.

I’d also like to point out that some fairly well-respected folks—notably the LAPD and their specialty units such as SWAT and SIS, shoot a fair number of folks and have a very high hit rate on target—still use the modern technique.

Advance the Craft
I find no positive reason for any instructor to attack the tried and true other than to make a name for themselves. Wouldn’t it be better to just do your own thing and advance the craft? Or, let your work stand for itself? As I get older, except when dealing with outright frauds or prevaricators, I’m less likely to say negative things about another instructor. It’s like mom said: “If you can’t say anything nice, don’t say anything at all.”

We must all be open to new techniques, research and examine new trends, be willing to learn from others, test our methods in force-on-force or in competition, improve and advance. But all that glitters is not necessarily gold.

What does all this mean to you as an officer, firearms student or instructor? Remember that just because it’s new or old, doesn’t make it good or bad. Have an open mind and examine the new material but don’t confuse flashy moves or good marketing with sound structure and design. Be open minded but conservative to change.

By and large, you’d be better off mastering the basics, the fundamentals of marksmanship and learning to “run the gun” and focusing on how to shoot while moving off the attack line than learning to dive through windows, shoot upside down or while running full-speed at a target or whatever tactical ballet move or “high speed, lowdrag” technique an instructor is marketing today. I’ve seen some highly experienced military and police special operators practice. They are like machines. There are no flashy moves or techniques. It’s just so practiced, so fluid, so smooth, it’s like a machine.

In the end, it’s all about learning to put fight-stopping accurate rounds on target in an efficient manner to stop a deadly threat.