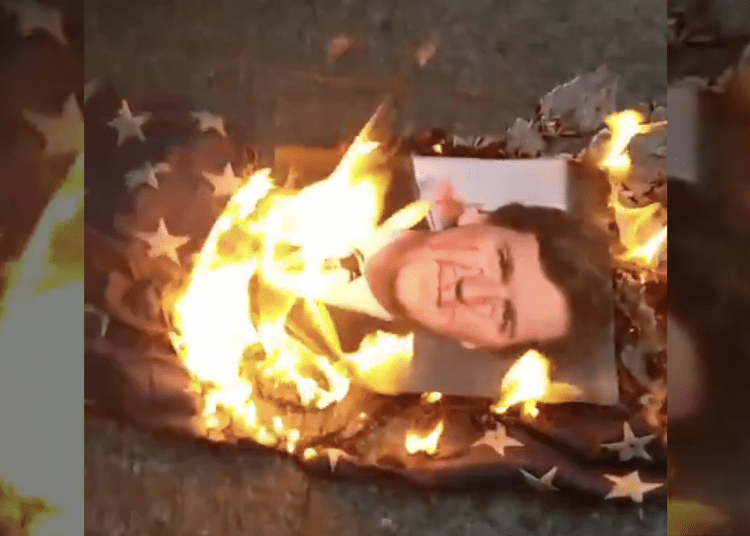 NEW YORK — Anti-American agitators outside of Fox News Headquarters in New York on Wednesday burned a photo of Tucker Carlson along with desecrating the American flag by fire.

It was reported to be a “small group of BLM protestors” who took to the midtown Manhattan streets to “protest the media company.” Laura Ingraham was also targeted by the hateful bunch as they marched with her photograph as well as other Fox News personalities, Post Millennial reported.

BREAKING: Hard left rioters burn an American flag and photos of Tucker Carlson outside the Fox headquarters in NYC
pic.twitter.com/7Y0AZ7XQWF

“You’re not here for us,” an agitator said through a megaphone. “You’re full of lies. You’re all racist. You’re Nazis, you’re Zionists, you’re KKK, Proud Boys,” the boisterous protestor said, while PM pointed out that Nazis killed Jews and Zionists are pro-Jewish and pro-Israel.

“Black people are dying and you’re not talking about that,” the propaganda producing mouthpiece said.

Actually, Fox News probably reports and analyzes black on black crime more than other cable news networks combined with frequent guests like Heather MacDonald, among others.

"You're all racist, you're nazis, you're zionists, you're KKK" pic.twitter.com/To9Wa2Sw53

The agitators ignited smoke bombs outside of Fox’s headquarters, saying “stop doxxing and villainizing us, we bring real smoke.”

protesters light an American flag and a picture of @TuckerCarlson outside Fox News HQ pic.twitter.com/P6BxRL96QL

The media company has been frequently targeted by leftist broadcasters such as MSNBC and CNN, which could exacerbate the hatred toward them.