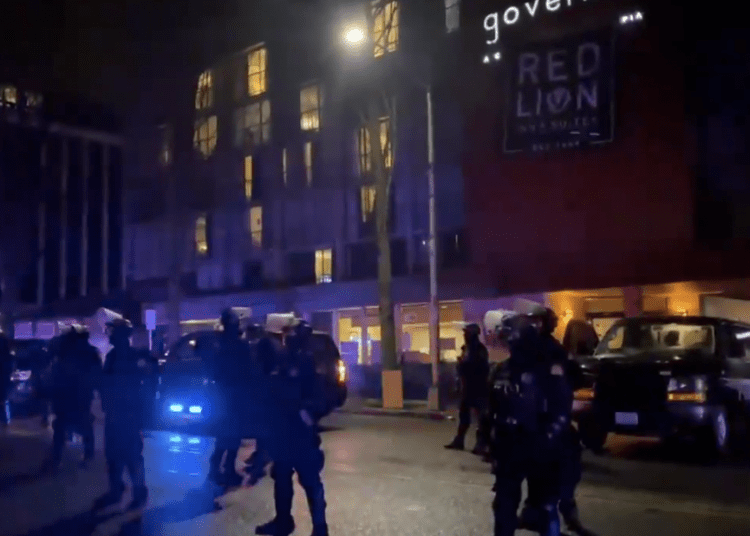 OLYMPIA, Wash. — Washington police arrested at least 12 people who occupied an Olympia hotel in an alleged attempt to “forcibly takeover the hotel” and demand local authorities provide housing for homeless individuals during the coronavirus pandemic, according to local reports.

Olympia police arrested at least a dozen homeless activists who are said to be from the group Oly Housing Now, local news station King 5 reported. The group of approximately 45 people barged into the Downtown Olympia Red Lion Hotel around 11 a.m. local time Sunday “armed with items such as hatchets, batons, knives and had gasmasks, helmets and goggles apparently in preparation for a confrontation,” the city announced in a press release.

They are now chanting to Olympia cops to “choke and die.” pic.twitter.com/EnMh9esHbu

Olympia officials said 40 hotel rooms were booked by bystanders at the time of the apparent takeover, Fox News reported.

“Before the occupation, the activist group had earlier reserved 17 rooms, which were occupied by currently unhoused individuals as the occupation occurred,” the city said.

Group Calls on Thurston County to Pay for the Rooms with FEMA Funding That Covers Non-Congregate Shelter at 100% pic.twitter.com/btGQ9rgOqX

One hotel worker was assaulted during the takeover, while the others sought refuge in the building’s basement, KING 5 reported. People from the group overtook the two floors of the hotel and reportedly covered the windows with dark-colored tarps.

Bystanders took shelter in their rooms, the city said.

Police obtained a search warrant for conspiracy to commit burglary, burglary and trespassing, and a SWAT team was called to the scene to clear the facility.

“As OPD clears the hotel, the City’s Crisis Response Unit is connecting those unhoused people to services. They will not be allowed to remain at the hotel,” the press statement said.

Charges against the 12 people were not immediately specified. It was not clear if more people would be charged.

“Making sure our unhoused residents have access to safe and affordable housing has been Olympia’s priority for more than a decade,” said Mayor Cheryl Selby. “Olympia has led on responding to homelessness, on coordinating shelter and other basic needs. The tactics used today by Oly Housing Now are unproductive and won’t make the mission more attainable.”

L.A. man fatally beaten with hammer by transient allowed to stay on property