2-year-old girl gets $75 fine for littering

2-year-old girl gets $75 fine for littering 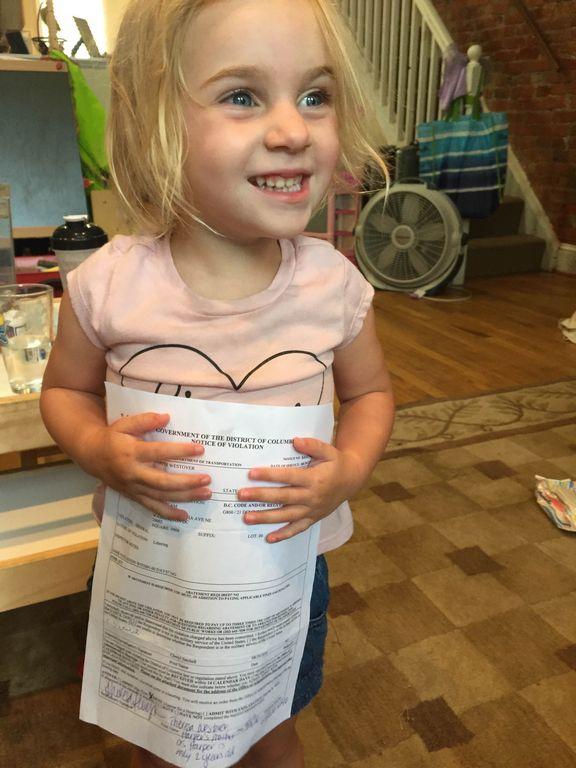 Harper Westover, age 2, had never run afoul of the government before. The “Paw Patrol” fanatic lives in Northeast Washington with her parents, who insist she’s just the tidiest, most polite and well-behaved toddler in the nation’s capital. They call her “Harpie.” Sometimes “Lovey.”

But to officials at the city’s Department of Public Works, Harpie is known by another name, etched in capital letters on District of Columbia government letterhead: VIOLATOR.

On Thursday, she received in the mail a “Notice of Violation” reporting that she was being fined $75 for allegedly littering at the end of the alley by her home, on Ninth Street NE.

Officials included evidence of a discarded envelope a city worker had found with a bag of trash in the alley. Exhibit A against Harpie the Violator was a photograph of that unopened envelope addressed to her from Bucky’s Buddies, a kids club for fans of the University of Wisconsin at Madison, the alma mater of her mother, Theresa.

A simple clerical error, right? Another tale to add to the city’s bulging sack of sad stories about bureaucratic dysfunction?

On Friday, Westover, an attorney for the National Labor Relations Board, called the solid waste inspector who issued the ticket, certain her daughter would be quickly absolved. She argued that her toddler did not haul a trash bag or carry her Bucky’s Buddies envelope to the end of the alley. Besides, Westover told the inspector, her daughter is 2. Could the Department of Public Works kindly rescind the fine?

“The inspector’s response was there was a piece of trash in the alley with Harper’s name on it. I said, ‘I understand that, but she’s only 2 years old. Are you willing to rescind the ticket?’ She said ‘No,’ ” Westover recalled. “They list Harper as a ‘violator.’ As a mom, it bothered me.”