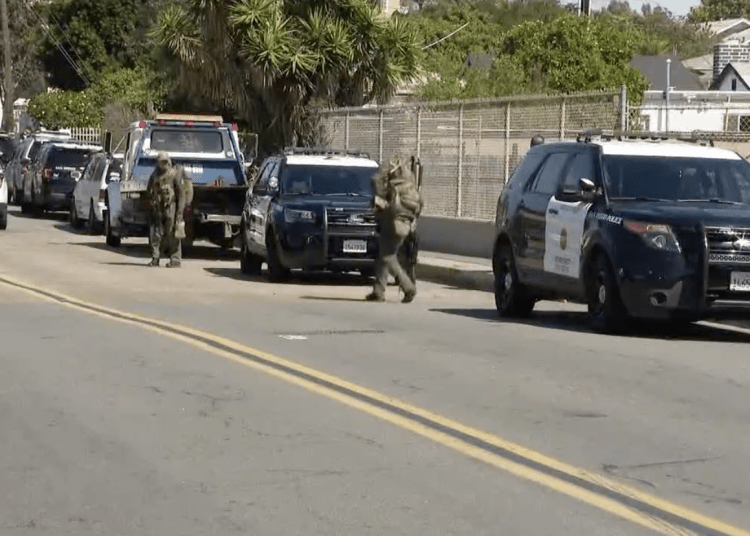 San Diego Police Department had a standoff with a 10-year-old boy who fired a shotgun at responding officers. (Screenshot CBS 8)

SAN DIEGO — A 10-year-old boy who became violently out of control during a family fight holed up in a shed behind his home with a shotgun on Thursday and fired several rounds at responding patrol officers, prompting a SWAT standoff that ended with his arrest.

No injuries were reported as a result of the volatile domestic dispute, according to the San Diego Police Department.

The events that led to the confrontation began about 9:15 a.m., when a family member made an emergency call to report that the boy was in a state of emotional crisis, behaving in a threatening manner and had grabbed a hammer and a knife, reported CBS8.

Officers arrived in the neighborhood to find that the child had gone into a shed behind his home and armed himself with a shotgun, SDPD public-affairs Lt. Shawn Takeuchi told reporters.

Moreover, as the initial responding officers approached the shed, the boy fired twice in their direction. Fortunately, he missed them, Takeuchi confirmed.

At that point, SDPD deployed crisis negotiators and a SWAT team to establish a perimeter around the home as officers evacuated neighboring houses.

SWAT then spent about 90 minutes calling out to the boy, seeking his peaceful surrender.

Shortly after 11 a.m., the boy emerged from the shed — which reportedly contained a cache of shotgun ammunition — and walked into his home. Shortly thereafter, he appeared at his front door with his hands over his head. As a result, officers took him into custody without further incident, according to CBS.

The nature of the family problem that led to the standoff was unclear.

Takeuchi said the boy would be taken into protective custody for a mental health evaluation, The San Diego Union Tribune reported.

“We are taking him into protective custody for what happened today, and ensure that he is not going to be a danger to himself or others,” Takeuchi told reporters.

Before the child surrendered, Takeuchi said that police responded as they would to any armed standoff, but were very mindful that they were dealing with a child. He said officers were “taking it slowly” as they worked for a peaceful resolution.

He also told reporters that investigators will look into the circumstances of how the child was able to access the firearm.