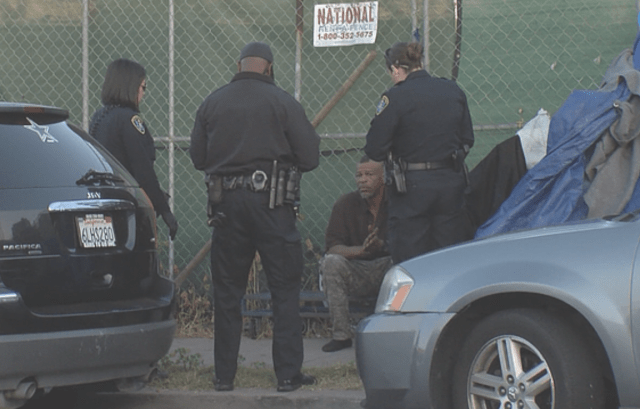 SAN DIEGO — Homeless people who face a ticket or arrest by San Diego police officers are being offered a chance to have the infraction cleared if they agree to stay for 30 days in one of the city’s large tented bridge shelters.

San Diego Police Capt. Scott Wahl said the new program could help stabilize lives and get people connected with services while also allowing officers to enforce laws on the street.

“I feel like we’ve started this division because we wanted to be a positive impact on ending homelessness,” Wahl said about the department’s neighborhood policing division that was formed in 2018. The division includes outreach teams and officers who enforce quality-of-life laws that often involve homeless people, the San Diego Union Tribune reported.

“We’re all trying to do our part in ending homelessness, and we want to do it in a way that’s compassionate but also has accountability,” Wahl said.

The new program is a revision of a similar effort that began in July. Last summer police began offering shelter beds in lieu of citations to homeless people who were detained by police for encroachment, illegal lodging, littering or other minor quality-of-life infractions.

Wahl said about 300 people took the offer. While this sounds good, there was a problem.

“We noticed that 67% of people blew out the back door on the very first day,” he said. These people took the offer to avoid citations but had no intention of remaining sheltered. “They’re circumventing the criminal justice system intentionally.”

Moreover, they are demonstrating their desire to remain on the streets.

The revised approach still offers shelter beds in lieu of citations, but the tickets aren’t torn up quite so soon. If a person leaves the shelter before 30 days, the citation will be enforced.

Wahl sees the incentive as having a twofold benefit: addressing quality-of-life infractions in neighborhoods while also giving homeless people a month to learn about programs that could help them find housing and overcome issues related to their homelessness.

“They can still go outside,” Wahl said about the 30-day stays at the bridge shelters. “It’s not jail. They’re still free to come and go, but they have to be in at night.”

Under the program, 50 of the 128 beds at a new shelter run by the Alpha Project are reserved for homeless people brought in by officers. The shelter opened at 17th Street and Imperial Avenue in November, and the police incentive program began shortly afterward.

The shelter was the site of a fatal shooting of Alpha Project security guard Ernest Buchanan on Dec. 28. Consequently, detectives are still investigating the murder with no further information publicly released.

Bob McElroy, president and chief executive of the Alpha Project, said that the 50 allotted beds are filled most nights and that the incentive program has shown some success after working out a few early kinks. One homeless person has found housing after being brought in by officers under the program, he said.

The shelter program is an outgrowth of an initiative the San Diego Police Department’s Homeless Outreach Team has been conducting for several years. Officers who encounter someone who is homeless may offer the person one of 50 beds that have been reserved for the department at a bridge shelter run by Father Joe’s Villages, according to the Tribune.

Wahl said that only 1 in 10 homeless people approached by police in encounters not related to an infraction accept the offer of a shelter bed, which he called frustrating.

He said that he has seen better retention for those who accept the offer of a shelter bed under the revised program but that it’s still too early to judge whether it’s effective.

In the new program’s first few weeks, Wahl said, 46% of people brought in walked away before the 30 days were up. Though that’s an improvement over the 67% who left under the earlier program, Wahl speculated whether the recent cold and wet weather might have motivated people to stay in shelters longer.

McElroy said that people have been staying longer in recent weeks and that he sees some potential to the program.

McElroy had reservations in the beginning. He said some people who were brought in had kits to use heroin and methamphetamine because they had not been properly searched, and others showed up with many more bags of possessions than are allowed inside the shelter.

McElroy said better communication with law enforcement ironed out those problems. In another issue, he said, people in the program originally were not offered the same services as others in the shelter but rather given limited services from the county. McElroy said he made it clear in meetings with county officials that anybody in the facility would have access to all of its resources.

“If they come in, they have the same access to our case manager and housing navigators,” he said. “We made it clear … we’re not changing any of our programs.”

Some advocates for homeless people have expressed concerns about the new program, saying that reserving shelter beds for people brought in by police reduces the number available for others who want to get in. Advocate Michael McConnell said people who walk away from the shelter before the 30 days are over could find that prosecutors use that information against them in court.

The new program is one of a few changes that have been made to the Police Department’s outreach efforts since the neighborhood policing division was formed, including expanding the homeless outreach teams with four specialists from the county Health and Human Services Agency and three members of the Psychiatric Emergency Response Team who patrol with officers daily.

Last year, two caseworkers were added to work with people who accept offers of a bed at Father Joe’s Villages, and Wahl said he is hopeful that the change will lead to more people accepting offers of shelter beds from police officers.