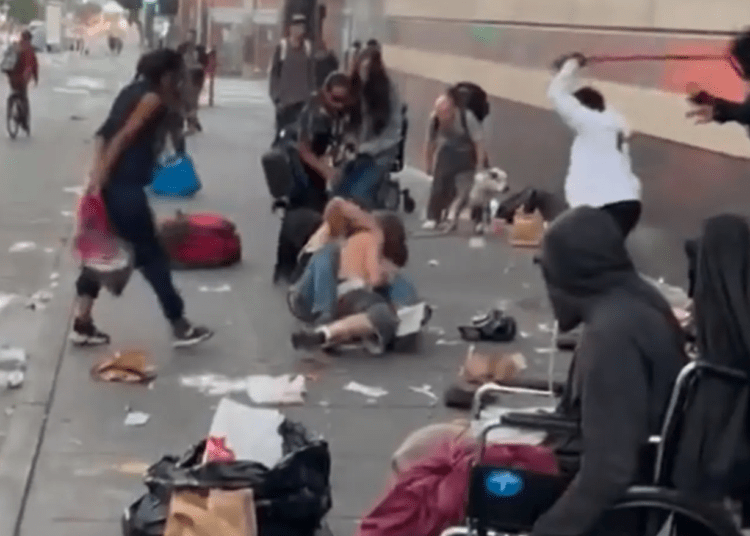 SAN FRANCISCO – Under Democrat leadership, the streets of San Francisco are not what they used to be. The squalor has spread unabated and the once beautiful city is an attractive nuisance to all manner of degradation.

The city of over 800,000 people, according to the 2020 census, could have as many as 20,000 homeless individuals living on the streets by year’s end, reported the San Francisco Chronicle.

A viral video on social media demonstrates the blithe disregard for sanity or sanitary conditions that are tolerated in the city. It also offers a grim new snapshot of San Francisco’s surging homelessness crises as two men can be seen brawling amid squalid conditions on a city sidewalk.

The shocking scene was filmed and posted to Twitter by J. Terrell Allen. He said he came across the wild fight in San Francisco’s SoMa neighborhood during an evening walk. As you will see below, this is not a pleasant stroll.

On my evening walk. SOMA isn’t safe. Just happened. This is disgusting @MattHaneySF. I’ve written to your office and you and failed to take action. Why??? Is it worth your time? pic.twitter.com/cLwAtb4ZGU

“SOMA isn’t safe. Just happened. This is disgusting,” wrote Allen, who could not immediately be reached for comment late Friday, the New York Post reported.

“I love going for long walks and passing by this every single day in my hood,” Allen added in a separate tweet. “Love the smell of crack and poop. Beautiful San Francisco.”

The tweet was tagged for Democrat Assemblyman Matt Haney, who labels himself as a “progressive champion for San Francisco” after previously holding office on the San Francisco Board of Supervisors, District 6.

In a tweet from May 12, Haney noted his recent appointment as “Assistant Majority Leader of Policy & Research.”

He continued, “In this role, I’ll oversee the Assembly Office of Research & Policy to do actionable analysis of pressing issues facing CA, including housing, homelessness, & post-COVID recovery.”

This week I was appointed by Speaker @Rendon63rd as Assistant Majority Leader of Policy & Research.

In this role, I'll oversee the Assembly Office of Research & Policy to do actionable analysis of pressing issues facing CA, including housing, homelessness, & post-COVID recovery.

Haney’s tweet appears to be nothing but bluster as the city by the bay is in a state of decomposition.

The city has a recent of history of restricting police officers from enforcing quality of life crimes, i.e. drugs, prostitution, vandalism, public defecation and urination, etc. We have been seeing the results for years now, while politicians like Haney continue to talk yet do nothing to combat the growing problems.