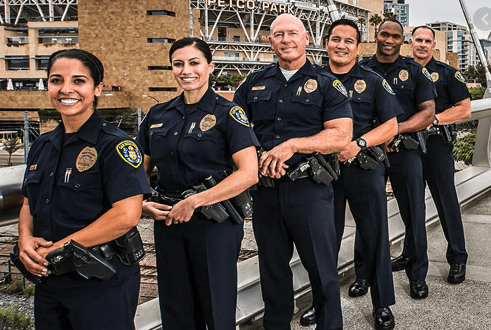 SAN DIEGO — San Diego has a chronic police officer shortage. This has prompted the city to start a home-buying incentive program. It will give officers as much as $50,000 toward a down payment if they buy a house in the city.

The goal of the $750,000 program will help the Police Department recruit and retain more officers, while also boosting community policing by encouraging more officers to live in the city instead of other parts of the region, city officials said.

“Maintaining San Diego’s status as one of the safest cities in the country starts with recruiting the best and brightest to protect and serve,” Mayor Kevin Faulconer said at a Wednesday news conference.

“This new home-buyer program gives us another powerful tool to attract top talent and provides the opportunity for more of our officers to live in the neighborhoods they’re working to keep safe,” he said. “It sends a very strong and powerful message, backed up with dollars.”

Police Chief David Nisleit said he expected many officers to embrace the incentive, noting that three preliminary workshops hosted by the department had been well attended, reported the Los Angeles Times.

“One of the things we constantly hear when people leave is that they can’t afford to own a home here,” Nisleit said Wednesday.

Many San Diego officers live as far away as southwest Riverside County, where homes are much less expensive. However, the commute to work can be longer than 90 minutes. An analysis last year by the police officers labor union found that about 30 percent of city officers lived within San Diego.

Union President Jack Schaeffer is optimistic about the program. He expects officers to embrace it.

“We believe quality of life will improve for our officers and their commute times will decrease exponentially,” he said.

Since Nisleit took over the department from former Chief Shelley Zimmerman in March 2018, the number of officer vacancies has shrunk from nearly 300 to about 150.

The city’s goal is to have 2,040 officers. Nisleit said there would be just fewer than 1,900 when a new Police Academy starts on Monday with 48 recruits.

In addition, the city has given pay raises of at least 25 percent to officers, hired a social media-marketing firm to boost recruiting, and revamped the department’s written exam and background checks.

While most other departments have used signing bonuses and finder’s fees for years, San Diego appears to be ahead of the curve on the home-buying program.

The program is open to officers who have never owned a home, and they must contribute at least 3.5% of the purchase price toward the down payment. Moreover, they must also have a credit score of at least 680.

But here’s the catch to the home-buying incentive program. The money is simply an interest free loan, according to the Times report. It’s not a “bonus” or other form of compensation. Furthermore, the incentive loan must be repaid within five years and the officer must live at the property during the entire course of the loan.

“Assisting our San Diego police officers with purchasing a home in the city helps them establish roots in the communities they serve, and provides them with an additional incentive to join and stay with the San Diego Police Department,” he said.

The city is contributing $250,000 to the program. The other $500,000 is coming from Pacific Western Bank and Mechanics Bank.

Faulconer and Cate said they expected the program to become larger in the future.