Wrong Man Caught Up in Philadelphia Hunt for “Kensington Strangler” 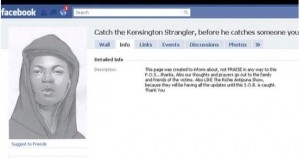 PHILADELPHIA – A reward for the "Kensington strangler" murder suspect is expected to hit $30,000, and a Facebook page put a local man in the middle of all of this.

Fox 29's Dave Scratwieser reported Monday that, according to police sources, the six-fold increase to the original $5,000 reward will be announced Tuesday. The city and Citizens Crime Commission will offer $25,000, and the Fraternal Order of Police is expected to chip in with another $5,000. Police said they are tracking down hundreds of leads and tips, and they're waiting for a DNA result to come back determining whether the third murder victim from last week is linked to the two other women strangled to death in recent weeks.

The case made it to Facebook, too, where one man erroneously became public enemy No. 1 on Monday. The "Catch the Kensington Strangler, before he catches someone you love" Facebook page features two police sketches that have been released in the case. But earlier the page showed the name, photo and address of a man who has been questioned and cleared in the case. Fliers with the man's identity were being circulated around Kensington on Monday, and he's waking Tuesday to find his name in the newspaper, as well.

This man called police himself Monday after a group gathered outside of his home, and a police car actually had to escort him to the department's special victims unit for safety and an interview just to make doubly sure he was not the suspect. The man says he had a problem with somebody, and that person is probably the person who put him on the Facebook page and fliers.

Police later put out word of the incident, worried that someone might take matters into their own hands in the form of possible vigilante justice, Fox 29's Steve Keeley reported. Whoever started circulating the man's name on fliers or Facebook could face charges, police said. They're likely to discuss the matter more at their expected noon news conference on the reward and overall investigation.