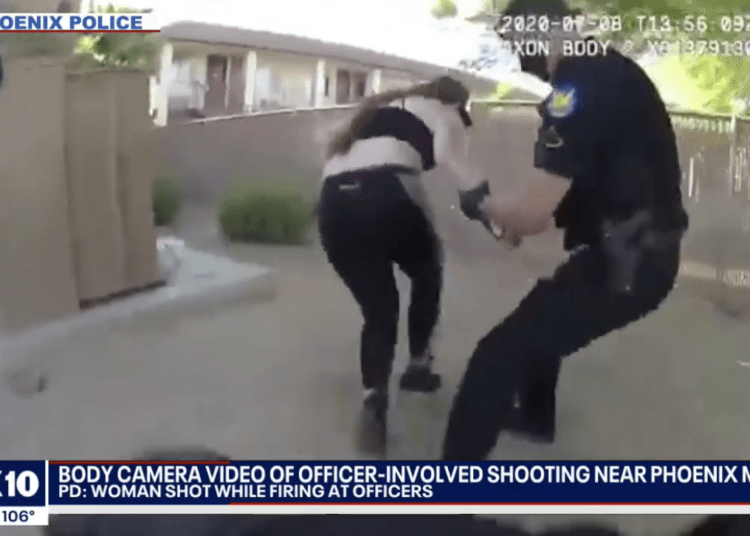 Jovana Kelsey McCreary pulled a gun and fired at police when being handcuffed. (Phoenix Police )

PHOENIX — Phoenix police released body camera footage last week of a shooting with a woman who pulled out a gun and fired at officers while she was being handcuffed earlier this month.

Officers responded to a motel on Black Canyon Highway on July 8 after a man called, saying his roommate was “becoming crazy” and had shot a gun, Phoenix police said.

When approached, the woman, identified as Jovana Kelsey McCreary, 24, told officers she didn’t have a weapon. Nevertheless, when an officer searched her bag he found ammunition and illegal drugs, Fox 10 Phoenix reported.

The woman also denied she had fired a weapon during the purported altercation with the roommate.

On July 8, 2020 officers were involved in an OIS near I-17/Peoria. Jovanna McCreary removed a gun from her waist during her arrest and fired towards officers. Officers shot Jovanna. She was taken into custody and later booked for several crimes.
Read more https://t.co/gHTp7KqSBR pic.twitter.com/0bSqMKwJrg

In the video, as one of the officers attempts to handcuff McCreary, she manages to get out of his grasp and pulls a gun from her waist, firing as she runs down the street.

“She’s got a gun!” one the officers can be heard saying, as they return fire.

McCreary was hit twice and rushed to a hospital in critical condition. According to the report, she survived her injuries.

The type of firearm was not identified, although one officer appeared to discover ammunition for a .357 magnum in her belongings.

Fortunately, no officers were injured in the shooting.

McCreary, who also had a previous misdemeanor warrant for her arrest, was later booked on a variety of crimes, police said.