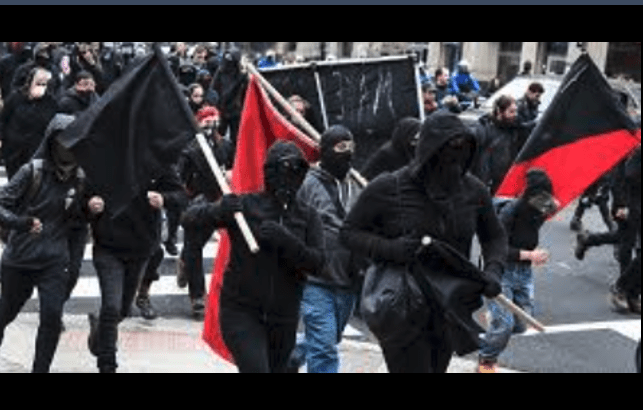 At least four accounts tied with the militant group have been yanked offline — @JewishWorker, @RevAbolition, @RevAbolitionNYC and @TheBaseBK, the account for the anarchist center in Bushwick, Brooklyn, the New York Post reported.

Archived web pages of the accounts show they shared more than 71,000 followers and dated as far back as 2012, according to the Post.

Antifa Sacramento railed against The Base’s suspension on its own Twitter.

“Our comrades w The Base (@TheBasebk), an anarchist social center in Brooklyn, NY of 9 years now took this Twitter thing seriously. Reaching a platform of 17k followers they pushed a very specific line where politics were never blurred. Today, Twitter took their account down, and now theres a void,” the group tweeted Thursday.

“The Base took the same approach to Twitter as they do in the struggle for liberation. As anarchists they take a stand & never waver. Its inspiring. And we encourage everyone to check their site now & periodically http://thebasebk.org Solidarity forever!”

The suspensions were first reported by Andy Ngo, who runs the conservative blog, The Post Millennial.

Breaking: @Twitter has suspended several prominent #antifa accounts. @TheBaseBK is one of them. The Base is an extremist bookstore in Brooklyn, NY that has been used as an antifa training center. pic.twitter.com/CeCIhzpJBQ

Members of Antifa ransacked the streets of Seattle the night of President Biden’s inauguration, smashing up the historic Starbucks and burning an American flag, the Post reported.

They also marched through Portland, Oregon, with a banner reading, “WE DON’T WANT BIDEN — WE WANT REVENGE,” Law Officer reported.

Moreover, there have been more than 70,000 QAnon-related accounts that have also been purged.