Off-duty police sergeant suffered a knife wound to his neck 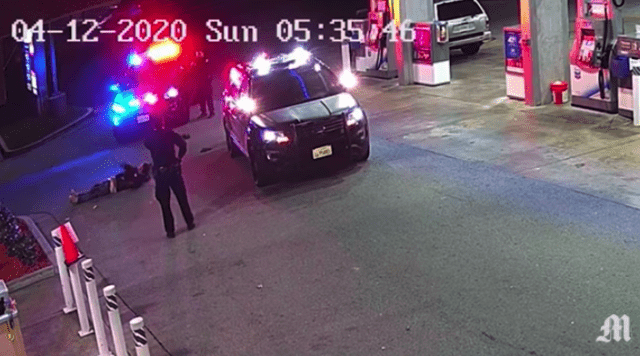 SOUTH SAN FRANCISCO — Recently released surveillance video shows a wild confrontation early Sunday in which a man was seen attacking gas station patrons, fighting an off-duty police sergeant, getting tased, and stealing a patrol unit before he was later shot and killed by police.

The suspect was identified Monday as Justin Silvernale, 35, of Antioch, The Mercury News reported. The people he injured, a San Francisco police sergeant and a civilian whose name was not publicly disclosed, were both treated for stabbing injuries at a local hospital and were expected to recover. Law-enforcement sources told Mercury News that the sergeant, a detective just coming off an overnight shift, suffered a slash wound to his neck.

The victims were apparently chosen at random, San Mateo County District Attorney Steve Wagstaffe said. Moreover, he said mental illness and drug abuse are factors being explored in his office’s investigation of the encounter.

“The victims were in the wrong place at the wrong time,” Wagstaffe said. “This seems to be a desperate man who was willing to harm others. We’re going to investigate what was behind all of this.”

Security footage obtained by The Mercury News shows that around 5:25 a.m. Sunday, a man can be seen attacking two men near an SUV parked by a gas pump near the mini-mart and accompanying Carl’s Jr. restaurant.

The San Francisco sergeant, who is filling up his pickup truck at a nearby pump, sees the confrontation, and runs over to intervene. The man, since identified as Silvernale, rushes the sergeant several times and appears to make contact with him at least once.

The two then make their way to the rear of the gas station area near the Carl’s Jr. drive-thru lane. At some point, the sergeant fired one shot at the suspect; authorities say Silvernale was wounded, although in the video he falls down more than once but is clearly mobile. At one point, while lying on his back in the drive-thru lane, the man repeatedly makes what look like slashing motions at his own throat.

Wagstaffe confirmed that the suspect was hit once in the torso by a bullet fired by the off-duty San Francisco sergeant, reported The Mercury News.

A few minutes later on the video, South San Francisco police officers arrive, and the man is surrounded by the officers in front of the mini-mart. One of the officers deployed a Taser on the man. He is momentarily incapacitated, but he eventually gets up from the ground.

As the assembled officers maintain distance from the suspect, they watch as he casually ambles to the driver’s side of a parked police unit, gets inside and drives away. The other police officers then engage in a pursuit of their stolen vehicle.

Police said Silvernale drove about a mile west to the Kaiser Permanante medical offices, also on Hickey Boulevard, and tried to drive through security gates leading to the parking garage. All four tires on the stolen police unit were flattened as the suspect drove over tire spikes.

Next, the fleeing suspect rammed a pursuing patrol vehicle before exiting, pulling out his knife, and confronting another officer, police said. Eventually, three officers opened fire. Silvernale died at the scene.

“No matter what time of day it is or where you are, police officers are always on the job. Our officer showed true heroism in risking his life to protect others from a violent attacker, suffering a knife wound in the process,” Tony Montoya, president of the San Francisco Police Officers Association, said in a statement. “This is yet another example that police officers must always be vigilant, and we are thankful he is safe and will recover from his injuries.”

All officers involved in the shooting have been placed on paid administrative leave per normal protocol.