The claim, a likely precursor to a lawsuit, alleges the killer of Sgt. Michael Paredes should have been in custody at the time of the double murder due to his prior criminal record. 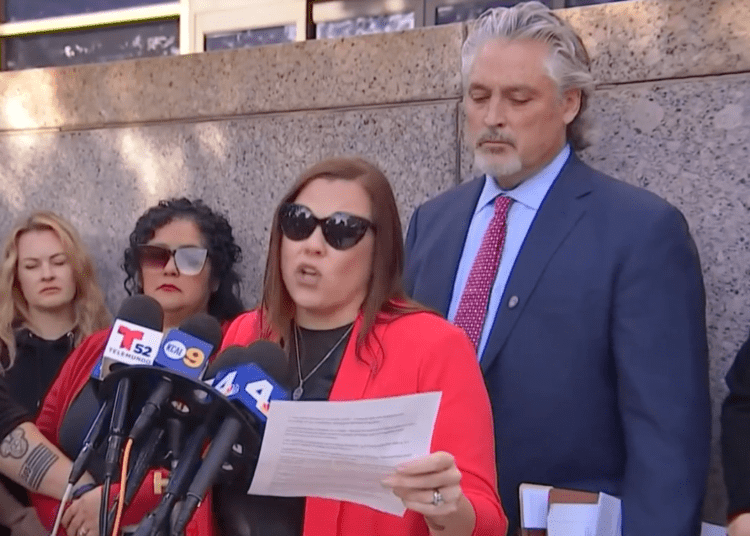 LOS ANGELES COUNTY, Calif. – The widow of a slain California police sergeant killed in an ambush attack has filed a $25 million claim against Los Angeles District Attorney George Gascón. The claim is a likely precursor to a lawsuit.

Sgt. Michael Paredes, 42, and Officer Joseph Santana, 31, of the El Monte Police Department, were ambushed and killed by Justin Flores, 35, when responding to a call at the Siesta Inn Motel on June 14. Paredes’ widow, Janine Paredes, filed the claim alleging their deaths were the direct result of Gascón’s negligent policies, which ignore state law.

Janine Paredes alleges that despite Flores’ extensive criminal record, instead of being in custody he was allowed to “freely roam and prey on unsuspecting residents and workers in El Monte” because of Gascon’s progressive policies. Included in the documents are a list of Flores’ prior convictions, which include vehicle theft, resisting arrest and burglary. The claim alleges wrongful death and emotional distress, NBC Los Angeles reported.

Tuesday morning Janine Paredes and her attorney, Michael J. Peacock, spoke at a press conference to discuss the claim.

“People have not been held accountable and the law has not been enforced as far as people being on the street who should be in jail,” Janine Paredes said.

“For reasons currently unknown and with overwhelming indifference, Justin Flores was allowed to continue his rampage of criminal violence against the unsuspecting people, including two dedicated police officers,” said Peacock. “The District Attorney’s Office and the county Probation Department created an opportunity for an already violent man to take the life of Michael Paredes, a beloved husband, father, friend, son and police officer. To call this a tragically negligent decision by the D.A. is an understatement.”

According to the claim, one day before the fatal shootings, Flores’ probation officer filed for a revocation of probation since Flores reportedly battered his girlfriend the week prior. Regardless, Flores was not taken into custody.

Following the murders of Sgt. Paredes and Officer Santana, Flores died by suicide on the sidewalk outside the motel, according to the Los Angeles County Coroner’s office, Law Officer reported in June.

Flores was on probation for illegally carrying a gun and had been banned from possessing a firearm since 2011. He also received a series of lenient breaks that prevented his incarceration.

According to the Los Angeles Times, Flores had served two prison terms for burglary and auto theft.

His mother said he also had a prison record for domestic violence, KTLA reported.

Moreover, Flores pleaded no contest to “felon in possession of a firearm” last winter.

The weapons charge could have returned him to prison for three years, but instead the career criminal was lightly sentenced to two years’ probation and 20 days of time served, the Los Angeles Times reported.

And then there was the domestic violence incident where he allegedly victimized his girlfriend one week prior to the shooting for which his probation officer sought a revocation. Shortly after the officers were murdered, Gascon’s office said they would look into why Flores’ was not taken into custody. Their findings remain unclear.

“Our hearts go out to the family of Sgt. Paredes,” the prosecutor’s office said in a statement. “His tragic murder is a devastating loss to both his family, friends and the community he bravely served. We have nothing but empathy for those who are suffering. We were not informed that Sgt. Paredes’s widow intended to file a lawsuit against our office. We have not reviewed the legal documents and cannot comment at this time. Again our heart goes out to the victims of this horrific tragedy.”

According to NBC Los Angeles, Flores reportedly followed his wife Diana Flores to the hotel June 14, where she tried to flee from him after he reportedly stabbed her a day earlier.

Police were notified and officers responded shortly after Flores found his wife at the Inn.

Diana Flores said she warned police that her husband had a weapon and was not in the right state of mind.

The El Monte officers drew fire after knocking on the motel room door at the Siesta Inn, Law Officer reported in June.

A shootout with Flores started in the room and ended in the parking lot with all three men dead.

“I love my husband to death but … this wasn’t my husband. This was a monster,” Diana Flores said.

“I didn’t want anyone to get hurt in this,” she told NBC. “I am so deeply sorry.They didn’t deserve that, or their families. They really didn’t. They were trying to help me.”