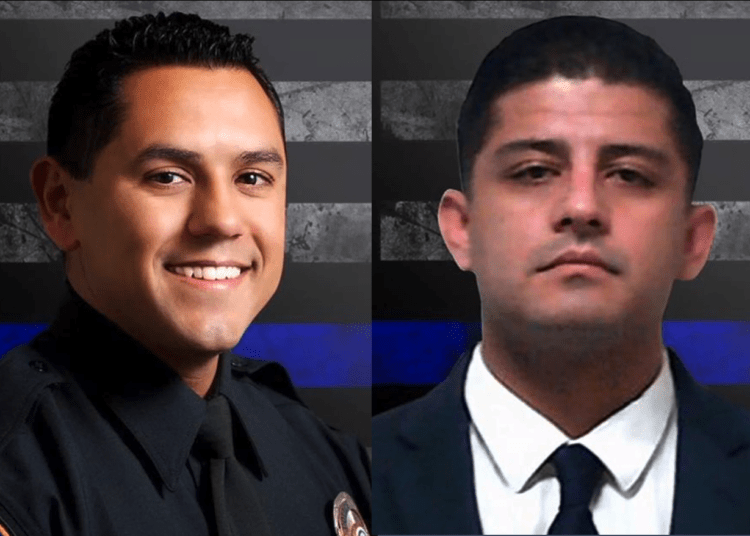 Justin Flores, 35, died by suicide on the sidewalk outside the Siesta Inn Motel, where he fatally shot Cpl. Michael Paredes and Officer Joseph Santana on Tuesday, the San Gabriel Valley Tribune reported.

Flores’ cause of death was listed as a gunshot wound to the head. Officials had said Flores died during a shootout with other officers after he killed Paredes, 42, and Santana, 31, inside the motel as they responded to a domestic incident related to a stabbing.

The coroner’s report said Paredes and Santana both died from gunshot wounds to the head.

EL MONTE, Calif. – The suspect who gunned down two El Monte police officers at a motel Tuesday was on probation for illegally carrying a gun and had been banned from possessing a firearm since 2011. He also received a series of lenient breaks that prevented his incarceration.

Justin Flores, 35, is accused of murdering Cpl. Michael Paredes and Officer Joseph Santana. The gunman was also killed in the firefight when officers responded to the report of a stabbing, Law Officer reported.

According to the Los Angeles Times, Flores had served two prison terms for burglary and auto theft.

His mother said he also had a prison record for domestic violence, KTLA reported.

Moreover, Flores pleaded no contest to “felon in possession of a firearm” last winter.

The weapons charge could have returned him to prison for three years, but instead the career criminal was lightly sentenced to two years’ probation and 20 days of time served, the Los Angeles Times reported.

And there is more…

Flores was accused of assaulting his girlfriend last week. As a result of the new domestic violence allegation, his probation officer filed for a revocation hearing the day prior to the double homicide of Cpl. Paredes and Ofcr. Santana, according to the Los Angeles Times.

Despite his ongoing trouble, Flores was allowed to remain free ahead of a June 27 hearing.

The Los Angeles County Probation Department was “currently investigating” why Flores was not taken in for the violation, according to the Times.

A shootout with Flores started in the room and ended in the parking lot with all three men dead, officials told the Los Angeles Times.

According to NBC Los Angeles, Flores reportedly followed his wife Diana Flores to the hotel, where she tried to flee from him after he reportedly stabbed her a day earlier.

Police were notified and officers responded shortly after Flores found his wife at the Inn.

Diana Flores said she warned police that her husband had a weapon and was not in the right state of mind.

“I love my husband to death but … this wasn’t my husband. This was a monster,” Diana Flores said.

“I didn’t want anyone to get hurt in this,” she told NBC. “I am so deeply sorry.They didn’t deserve that, or their families. They really didn’t. They were trying to help me.”

She said she fled the room as the officers arrived. Soon after, she heard gunfire, so she ran.

“We don’t have all the facts yet,” El Monte Mayor Jessica Ancona reportedly said Tuesday night, adding the officers were “essentially ambushed.”

Both officers were native to the area. “They grew up here; to us, they’re El Monte homegrown,” Ancona said. “They’re our boys.”

“They were good men,” Capt. Ben Lowry, the El Monte Police Department’s acting chief, said “These two heroes paid the ultimate sacrifice today. They were murdered by a coward.”

Santana, 31, is survived by his wife, daughter and twin boys.

Paredes, 42, a 22-year veteran, left behind his wife, daughter and son.

A growing memorial at the El Monte Police Department was adorned with candles, flowers, US flags and “thank you” signs by community residents.

Los Angeles County District Attorney George Gascon has been appropriately criticized for his soft-on-crime policies. This case can be added to the mounting circumstances that have led citizens demanding his recall.

Within Gascon’s own organization, 98 percent of LA’s prosecutors support the effort to recall him. “The other two percent were likely cronies hired by him after he took office,” said a local police officer who only wanted to be identified as “Chuck.”

Moreover, 30 of 88 cities in Los Angeles County passed votes of no confidence in the man whose philosophies undermine public safety, Law Officer reported.