The officers were responding to a call of a domestic violence-related stabbing, but no victim was ever located 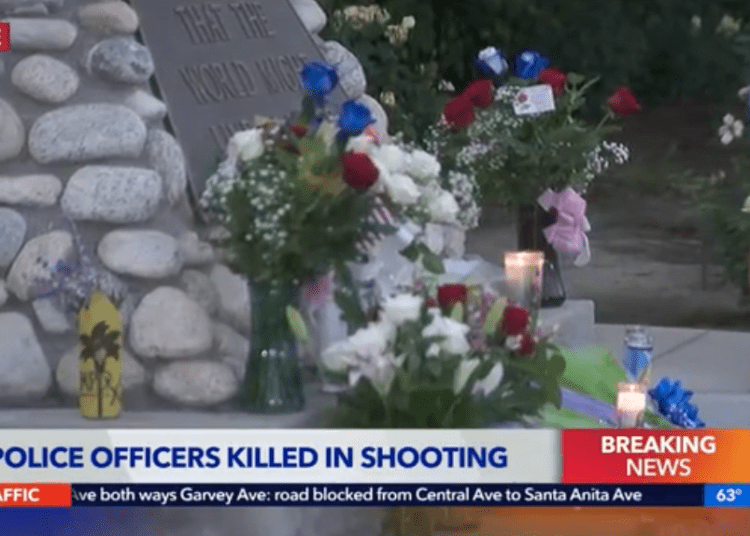 EL MONTE, Calif. – Two California police officers were gunned down in an “ambush” attack Tuesday evening, and now a memorial is growing Wednesday for the law enforcement professionals.

Flowers and candles are accumulating outside the El Monte Police Department for the officers who were murdered while responding to a reported stabbing in the 10300 block of Garvey Avenue, KTLA reported.

“These two men were loved. They were good men. They paid the ultimate sacrifice serving their community, trying to help somebody … They were murdered by a coward,” acting El Monte Police Chief Ben Lowry said after the shooting Tuesday.

Investigators said the two officers were ambushed by gunfire from inside a motel room as soon as they arrived at the Siesta Inn around 5:10 p.m. in response to a stabbing reportedly related to domestic violence, Daily Wire reported.

“As our officers do on a daily basis, they were acting as the first line of defense for our community members when they were essentially ambushed while trying to keep a family safe,” El Monte Mayor Jessica Ancona said,  according to CBS News.

At one point, the suspect exited the motel room and exchanged gunfire with police.

When the shooting was finished, the officers were rushed to a local hospital where they were pronounced dead.

The gunman was also killed in the gun battle. His weapon was found at his side. No stabbing victim was ever located at the motel, KTLA reported.

The identities of the slain officers has not yet been released. However, officials said one was a 22-year veteran of the El Monte Police Department while the other had been a member of the agency for less than a year. Both were married and had children.

“There are no words to describe our grief and devastation by this senseless act as we learned about the passing of two of our police officers. It weighs heavy on our hearts and we are sending our support to their families,” a statement from the City of El Monte and the El Monte Police Department read.

The shooting suspect was identified by his mother Wednesday morning as Justin William Flores, KTLA reported.

Flores’ mother said her son had a prison record for domestic violence, but she could not explain why he would have shot the officers.