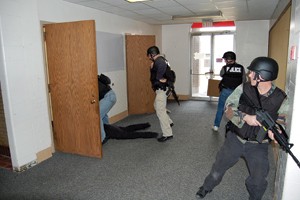 It has happened again in America.  There has been another terror attack in another American city. This time it was Columbus, Ohio.  Columbus is one of my favorite cities in America.  I have been there many times, and I have always enjoyed The Ohio State University (OSU),  the food, history and culture of that city.  Everything in our country is now viewed through a political lens.  In the coming days and weeks, Republicans and Democrats, liberals and conservatives, and the talking heads in broadcast, print and social media, will debate every aspect of this terror attack.   This terror attack involves some of the most volatile and hotly debated topics in our country: race, religion, and immigration.  I will not debate those topics here.   I’m a cop, and tomorrow I will put on a vest, badge and a gun, go to roll call and hit the street.   OSU Police Officer David Horujko did the same thing Monday morning.   If you are cop like David and me, here are 2 things to remember about this terror attack.

THE DEBATE ABOUT UNIVERSITY POLICE AND GUNS IS SETTLED

For some reason, the public has a negative perception about campus Police Officers.   The perception is that campus police officers are poorly hired, trained, are not qualified and thus should not have law enforcement powers or carry guns.  This negative, unfair and untrue perception was highlighted recently by protest on college campuses around the nation.   You can read about more this debate here.

I think it is ironic that according to early media reports, the terrorist attended Columbus State College in Columbus, OH before transferring to OSU.  The first article is dated in 2003 and that university president is no longer at there, but you get the point.  These opinions are still out there.

However, campus Police also respond to domestic assaults, burglaries, thefts, sexual assaults and other calls for service that cops handle every day.    In order to do their job effectively and safely, campus Police Officers need to be armed.   Ask any of the students or professors that narrowly escaped being stabbed Monday by the terrorist and whom Officer Horujko saved, if they think campus Police Officers should carry weapons.

DE-ESCALATION IS GREAT: BUT IT DOESN’T ALWAYS WORK

Our profession has always been evolving and cops have continually searched for new trends and better ways to do the job.   One current trend in law enforcement that has been in the news lately is:  de-escalation.

I won’t go into a definition of de-escalation here.  Every cop knows what it means, what it looks like in practice, and has done it.  Earlier this year I read David Klinger’s book, “Into the Kill Zone: A Cops Eye View of Deadly Force.”  I encourage everyone to either read his book, or listen some interviews that he has done recently.   Klinger is a former cop, who has worked some of the toughest beats in the United States, and unfortunately was involved in a lethal force encounter while on duty.

Klinger is a proponent of de-escalation and stresses that it is a skill set every good cop has.  Additionally, Klinger talks about talks about how when he was a cop in the late 1970s and early 1980s, there were no formal de-escalation programs for Police Officers.  He says it was just something that veteran cops passed along to rookies.

I learned this concept the hard way as a young officer.  I was out to save the world, and all law abiders beware!  I racked up several citizen complaints, including several involving use of force, until a veteran officer pulled me aside one day to provide some guidance.  Essentially, he explained to me to that a Police Officer should always, ALWAYS, be nice, until it was time, to not be nice anymore.   He stressed that the times in police work when we are required to NOT be nice anymore are a very VERY small fraction of police work.

Some in the media have discussed e-escalation training for Police Officers as a panacea.  It has become a sexy catch phrase for politicians and those in the media and described as some sort of cure-all to prevent Police Officers from using force.   If only police work were that simple.   Police work is often complicated, stressful, and lives hang in the balance in a matter of milliseconds.

Early reports indicate that OSU Officer Horujko was dispatched to a vehicle accident/pedestrians struck on campus.  He arrived, and saw a man with a knife who was trying to stab people.  Officer Horujko gave commands for the man to drop the knife, and when he didn’t, Horujko stopped the threat.   Witnesses say they heard Officer Horujko order the terrorist to drop the knife.  There was no time for de-escalation techniques.  Horujko had to act quickly to save lives and he acted according to the highest standards of the law enforcement profession.

I attended an incredible training class last year with Northern Red Training.  I was fortunate that my agency sent me to this class.  It was incredible.  I encourage anyone that can, to attend a training session by Northern Red.   One of the instructors, JD Potynsky, discussed what it is like when you are forced to take a life.   He called it a “significant emotional traumatic experience.”   I am sure that Officer Horujko is going through that right now.

It is said that buying someone a drink or a beer and toasting is the ultimate sign of respect and goodwill.  Well, when he is ready, I hope someone one day will buy Officer Horujko a beer or a drink, and in the words of Toby Keith, “raise up a glass against evil forces.”  I know the next time I have a beer or a drink, I will toast to Officer Horujko.   Here’s to you!

William Gage is an experienced and award winning law enforcement professional that recently returned to local law enforcement with the Leesburg VA Police Department, after a 12 year career as a Special Agent with the United States Secret Service. During his 12 years with the Secret Service, he was the recipient of numerous awards for investigative and protective excellence. He has participated in hundreds of protective missions, and has done numerous foreign and domestic foreign protective advances for the President, Vice-President, and others. These included protective missions to hostile areas such as Iraq, and Afghanistan. William also served as the Lead Tactical Advance Agent for numerous National Special Security Events (NSSEs), and served as a Team Leader on the elite Counter Assault Team (CAT) focusing on active shooter response, threat mitigation and planning at the White House and other U.S. Government functions and facilities. Prior to joining the Secret Service, William was a Police Officer in Leesburg, Virginia where he received awards for exceptional performance. During his time as a Police Officer has as served as a SWAT Officer, and Bike Officer. He returned to local law enforcement in 2013, and returned to the Leesburg Police Department and currently works Patrol. William also works as an active shooter and security consultant with several companies, including PSIG, BLR, and Willis. He has given numerous public presentations about active shooter awareness, training and preparation and has appeared on various other media outlets including CNN and CSPAN. He also helps businesses with continuity of operations planning and logistics. He has written for several law enforcement and security journals, to include Law Officer, Police One, Tactical Solutions Magazine, and others. He holds a B.A. from the Virginia Military Institute, and an M.A. from Boston University.
Tags: Active Shooterexclusivetactics