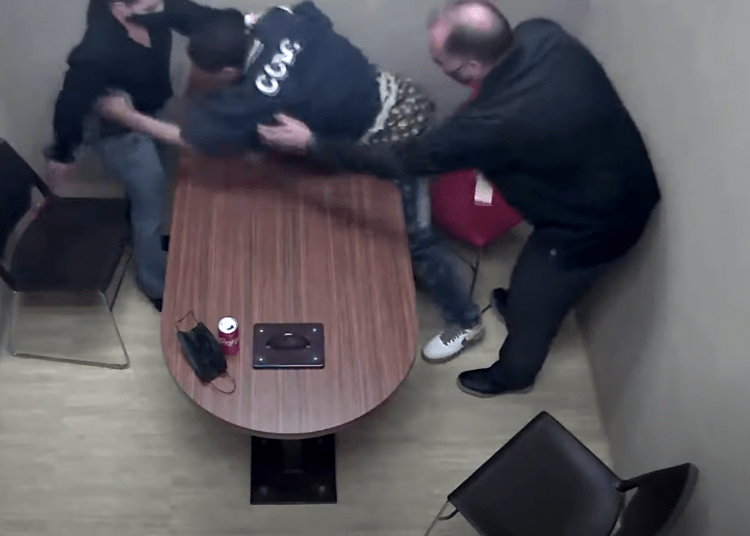 LAS VEGAS — A Nevada man accused of murdering a toddler by beating the child to death was captured on department video taking a homicide detective’s firearm during an interrogation last month, according to reports on Tuesday.

Terrell Rhodes, 27, is a suspect in the murder of 2-year-old Amari Nicholson. During a police interrogation on May 11, he was seated in the interview room with two detectives of the Las Vegas Metropolitan Police Department, KTNV reported.

According to police, Rhodes had just confessed to killing Nicholson and drew a map showing where the body could be found. The child was his girlfriend’s little boy. Detectives had momentarily left the interview room, but reappeared as Rhodes became emotional.

During the first few moments of the 80-second video, Rhodes appears to be crying—pulling his shirt over his face and saying, “let me go” and “I can’t go back.” He then slowly stood up from the chair, hunching his body over the table and placing both hands down before using his uncuffed left hand to reach across the table and grab the firearm from the detective’s holster, Law&Crime reported.

Both detectives quickly react and a wrestling match for control of the weapon ensues, while one of them repeatedly yelled “gun!”

According to KTNV, Rhodes said “I’m going to kill a motherfucker” during his scuffle with the detectives.

Police recovered the firearm approximately one minute after it was taken, and no one was injured during the incident.

During the confession, Rhodes reportedly admitted to punching the little boy multiple times because he urinated on himself. After the beating, the child turned blue and purple and completely stopped breathing. The suspect then concealed the body.

Rhodes reportedly drew investigators a map showing them where to find the child’s body, which was recovered the next day near Paradise Road and Twain Avenue, 8 News Now reported.

In addition to the murder charge, Rhodes now faces attempted murder charges due to the interrogation room incident. He is due back in court on June 25.