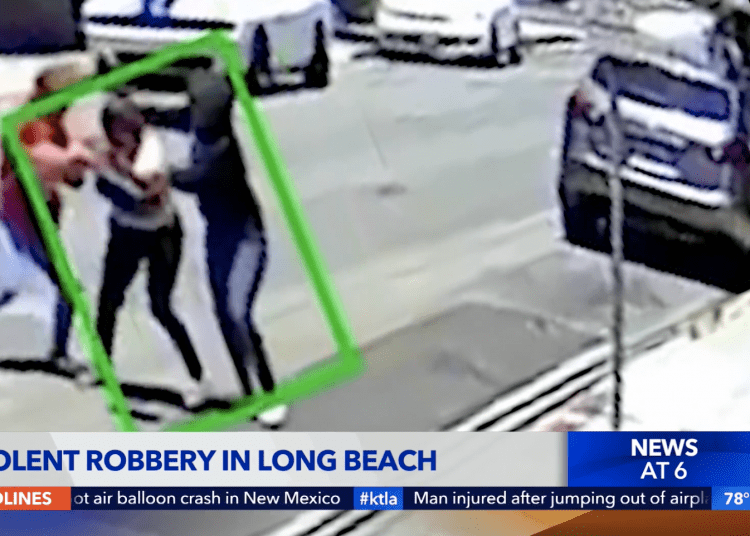 A woman is viciously attacked by two female suspects as she walked home from the bank in Long Beach. (KTLA)

LONG BEACH, Calif. — A private security camera captured the violent strong-armed robbery of a woman as she walked home from the bank in Long Beach, California on Thursday.

The victim, identified as Nimfa Morales, was returning home from the bank when she was accosted by two violent women who pummeled her while trying to snatch her tightly-held purse.

Long Beach Police Department received a call of the crime at 12:49 p.m. in the 300 block of E. Pearce Street, KTLA reported.

The female robbery suspects beat Morales over and over while knocking her to the ground and smashing her face, according to police.

As the melee continued into the street, the suspects finally made off with Morales’ wallet and some cash.

“It’s terrible that they would do this for a few couple hundred dollars,” said Morales’ son who was on the phone with her at the time she was brutally attacked.

“In that moment I’ve never felt so helpless in my life,” he said.

In addition to the emotional trauma caused by the crime, Morales now has medical bills due to a fractured foot and other unspecified injuries to her face and body, KTLA reported.

The attackers were described as females in their late teens to early 20’s, police said. The investigation is ongoing.

Police seek information with the investigation. Anyone with details regarding the crime is urged  to call the Long Beach Police Department’s Robbery Detectives at 562-570-7464.