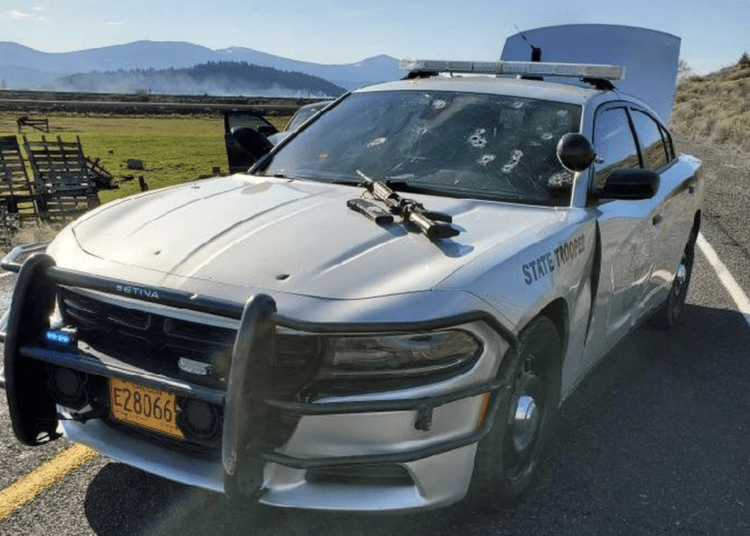 KLAMATH COUNTY, Ore. – An Oregon state trooper was wounded while the suspect died in a shootout, which occurred in Klamath County last month. The Oregon State Police on Wednesday released dramatic footage of the vehicle pursuit and subsequent shooting.

The chain of events began with a report of an intoxicated man trying to take his children in Klamath Falls, police said.

Klamath County Sheriff’s Office deputies responded to a home but the man had reportedly left with a child and a weapon, The Herald and News reported. The suspect’s vehicle was observed by a trooper a short time later and a pursuit began, police said.

The chase ended when deputies deployed a spike strip on U.S. 97, the vehicle was brought to a stop and the driver fired multiple times at the officers, according to police.

The April 10 footage shows police chasing a driver, who eventually gets out of his car and opens fire on law enforcement officers, Oregon Live reported. Rounds being fired hit a trooper’s patrol car, and the trooper can be seen returning fire.

The footage later shows a law enforcement officer carrying a young child away from the man’s car. The six-year-old child was not injured in the exchange of gunfire.

The footage does not show the suspect being shot.

Trooper Kameron Gordon was injured in the shootout. Fortunately, he is recovering and “doing well” Oregon Live reported.

The suspect, identified as Matthew Brennon Goff, died at the scene.

Goff fired at least 36 rounds into three occupied law enforcement vehicles, according to a community letter from the foreperson of a grand jury. He had an AR-15-style weapon, 10 fully loaded magazines and over 250 rounds of ammunition.

The grand jury ruled the deadly force used by a trooper and deputy was justified.

“I don’t think I’m alone when I admit my heart skipped a beat when I first viewed this video,” Oregon State Police Superintendent Travis Hampton said in a statement. “I credit the professionalism and remarkable bravery of the Oregon State Police Troopers and Klamath County Deputy Sheriffs that brought this violent event to end.”

The state police on Wednesday said they’re looking forward to welcoming the troopers involved in the shooting back to work.