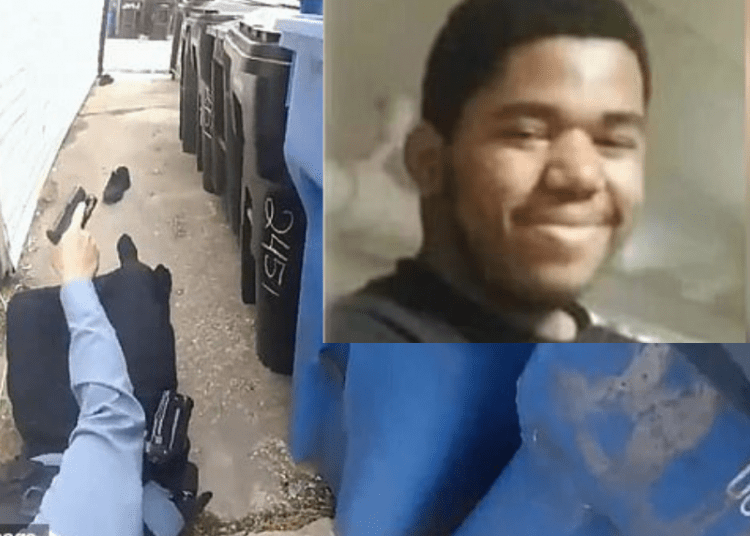 Chicago — Chicago officials have released graphic bodycam footage of a fatal police shooting last month that left one teenager dead and an officer and security guard wounded.  Travon Chadwell, 18, died of multiple gunshot wounds on March 25th after opening fire on a Chicago police officer and a Home Depot security guard after he was suspected of shoplifting.

Officers were called to the store on 4500 S. Western Blvd in Brighton Park where  Chadwell allegedly shot security guard Kevin Lockett in the head after he confronted him, Fox 32 reported.

As reported by the Daily Mail, Chicago’s Civilian Office of Police Accountability (COPA) publicly released video and audio footage that captured the events leading up to Chadwell’s death, as well as the moment he opens fire on the officer.  Bodycam footage from the wounded officer, who was not identified, shows him chasing teen after he fled to a nearby neighborhood.

The officer is seen running down an alleyway and onto a residential street where he encounters Chadwell who immediately shoots him.

The cop instantly collapses on the ground and is heard screaming to his partners: ‘Ah! I’m shot! I’m shot, I’m shot!’

(Video: Please note the video is graphic in nature.)

The teenager was taken to the hospital where he was pronounced dead on arrival.

According to Chicago officials, the incident marked the fourth time a police officer was shot at in the line of duty in two weeks.

Lockett remains in a coma, in critical condition, at a Chicago hospital.

Chadwell’s mother told CBS Chicago her son was not a ‘bad person at all’ and did not believe he intended to harm anyone.

In the weeks that followed the shooting, Chicago Mayor Lori Lightfoot has called for a policy that would eliminate foot pursuits.