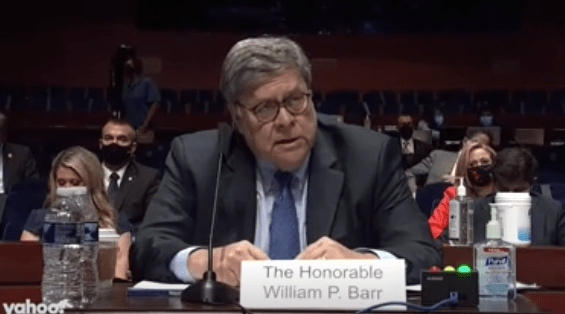 On Thursday, Attorney General William Barr directed his protective detail to make a u-turn so he could get out and thank pro-police demonstrators that were waving flags at an intersection.

“That time you’re driving in Virginia and the Attorney General spots a group of people in front of a police precinct showing their support for the police,” Barr spokesperson Kerri Kupec wrote in a tweet that featured a video of Barr meeting with the people.

According to Kupec, Barr said to his FBI detail: “Can we make a quick U-Turn? I want to jump out and thank those people.”

That time you’re driving in Virginia and the Attorney General spots a group of people in front of a police precinct showing their support for the police.

AG to FBI Detail: “Can we make a quick U-Turn? I want to jump out and thank those people.”

As reported by the Daily Wire, during his stop to talk with the pro-police demonstrators, Barr was praised for his recent performance in front of the House Judiciary Committee.

During the hearing, Barr was repeatedly berated and prevented from answering questions from the Democratic members on the committee.

Barr spoke extensively about the recent unrest across the United States.

“Unfortunately, some have chosen to respond to George Floyd’s death in a far less productive way by demonizing the police, promoting slogans like ‘All Cops Are Bastards,’ and making grossly irresponsible proposals to defund the police,” Barr said. “The demonization of the police is not only unfair and inconsistent with principles [that] all people should be treated as individuals, but gravely injurious to the inner city communities. When communities turn on and pillory the police, officers naturally become more risk-averse and crime rates soar. Unfortunately, we are seeing that now in many of our cities.”

“The threat to black lives posed by crime on the streets is massively greater than any threat posed by police misconduct,” Barr continued. “The leading cause of death for young black males is homicide. Every year, approximately 7,500 black Americans are victims of homicide. The vast majority of them, around 90%, are killed by other blacks, mainly by gunfire. Each of those lives matter.”

“Finally, I want to address a different breakdown in the rule of law that we’ve witnessed over the past two months. In the wake of George Floyd’s death, violent rioters and anarchists have hijacked legitimate protests to wreak senseless havoc and destruction on innocent victims,” Barr continued. “The current situation in Portland is a telling example. Every night for the past two months, a mob of hundreds of rioters have laid siege to the federal courthouse and other nearby federal property.”