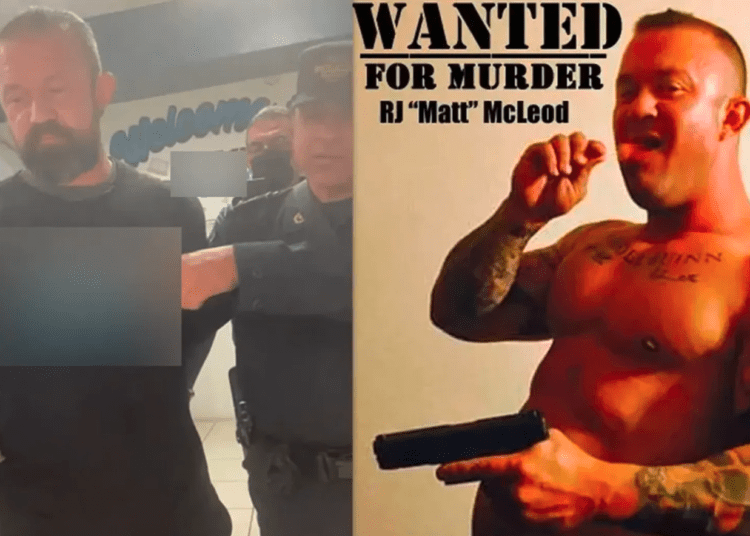 A tip led Marshals to a school in Sonsonate, El Salvador, where RJ McLeod was allegedly teaching English. (US Marshals/San Diego DA)

SAN DIEGO – The U.S. Marshals Service captured one of the top 15 Most Wanted for his alleged role in the 2016 murder of a woman in San Diego.

Raymond “RJ” McLeod — a muscular Marine veteran who stood at 5 feet, 11 inches tall and weighed around 230 pounds at the time of his disappearance — was arrested Monday after spending years on the run in Central America, Fox News Digital reported.

Police in San Diego found Krystal Mitchell dead on June 10, 2016. She was 30-years-old at the time of her death and had been dating McLeod for just a few weeks.

According to detectives, the scene showed “signs of a struggle.”

Both Mitchell and McLeod were from Phoenix, Arizona, visiting California to see friends, authorities said.

Although San Diego prosecutors obtained a murder warrant, McLeod evaded capture and disappeared. As a result, local investigators sought assistance from the US Marshals Service, kicking off a years-long manhunt that came to a conclusion Monday in Sonsonate, about 40 miles west of San Salvador near the Pacific Ocean.

Mitchell’s mother, Josephine Wentzel, a former detective, came out of retirement to help track down the man accused of killing her daughter. Marshals and Salvadoran authorities arrested him around 4:30 p.m. Monday after receiving a tip that he was teaching English in a school in Sonsonate, Fox reported.

Law enforcement authorities described McLeod as armed and dangerous, “an avid bodybuilder and a heavy drinker.”

“RJ McLeod does not deserve to be called a U.S. Marine,” said Fox Nation host Nancy Grace, who highlighted the manhunt on her show. She added. “He savagely murdered Krystal, and then, like a coward, went on the run.”

According to the Marshals Service, McLeod had a history of domestic violence and a reward of $50,000 was offered as bounty for the fugitive on the Top 15 Most Wanted List.

“He enjoys hurting women for its own sake,” psychologist Dr. Michael Bourke told Grace while filming the show. “He’s not someone that’s doing it for some other purpose. He simply enjoys it.”

Deputy Marshals Francisco Barajas and Luis Ramirez flew to El Salvador to facilitate local and national police make the arrest Monday afternoon and were escorting the fugitive back to the U.S.

Wentzel offered gratitude and praise for the regional U.S. Marshals Task Force Chief Frankie Sanchez and Barajas for their “excellent work” Monday evening, according to Fox.

“I have had faith and trust in them, and ever since meeting Francisca Barajas, I had full confidence that this day would come, and he would be the one to catch him,” she said. “I told him, ‘You are my hero. We are bonded for life.’”

“The passage of time will never deter the Marshals’ fugitive investigation for McLeod,” Marshal Steve Stafford of the Southern District of California said in April 2021. “If anything, it fuels our determination. We will leave no stone unturned until he is brought to justice.”

Their determination paid off and that day has arrived.